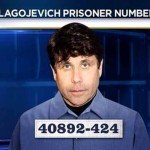 Rod Blagojevich, the former Illinois Governor who tried selling off Obama’s senate seat among many other things, was found guilty on 18 counts of corruption and sentenced to 14 years in federal prison. He’d claimed he was innocent for years, but upon being found guilty in a court of law, he’s suddenly all apologetic and contrite? “I’m not blaming anyone. I was the governor, … END_OF_DOCUMENT_TOKEN_TO_BE_REPLACED