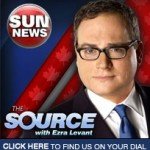 On the June 18, 2012 edition of The Source, host Ezra Levant put forward his 5-point plan to rid Canada of the Canadian Censors Council, or as they like to call themselves, the Canadian Broadcast Standards Council (CBSC). As I wrote last week, membership in the CBSC is 100% voluntary. If you do NOT want a television broadcast license, you have no need to “volunteer” to join … END_OF_DOCUMENT_TOKEN_TO_BE_REPLACED