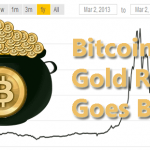 I've watched the infatuation with Bitcoins for some time now and was amazed at their meteoric rise in value. What I've been less surprised about is its equally meteoric fall. Dr. Gary North has long held that Bitcoins are not money. He has many reasons for that belief and every one of them, I believe, is correct. Bitcoins are not money. They are simply one more penny … END_OF_DOCUMENT_TOKEN_TO_BE_REPLACED