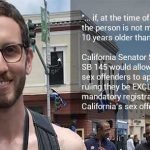 On January 18, 2019, California State Senator Scott Wiener (D-San Francisco) introduced SB 145 to "End Discrimination Against LGBT People Regarding Sex Offender Registration." The rationale behind his legislation is for California law to level the playing field between gay and straight offenders. "For example, if an 18 year old straight man has vaginal intercourse with his … END_OF_DOCUMENT_TOKEN_TO_BE_REPLACED