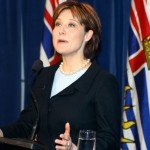 BC’s unelected Premier, Christy Clark, has really only done one thing since she began her run for the leadership of the BC Liberal Party: campaign. She hasn’t stopped.  She’s transformed the Premier’s Office website into a grand spectacle promoting, not British Columbia, but herself. Someone gave me a copy of the Chilliwack Progress published on December 22nd, 2011 … END_OF_DOCUMENT_TOKEN_TO_BE_REPLACED