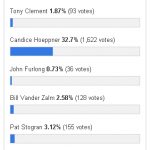 There's a poll going on at CBC right now under the title "Who was the biggest Game Changer in 2010? My vote goes to Candice Hoeppner for all her hard work on the gun issue.  To vcte, just head over to the link above. As I write this, the vote looks like this: Now, no disrespect intended to Mr. Nenshi, but getting elected Mayor of Calgary doesn't exactly have … END_OF_DOCUMENT_TOKEN_TO_BE_REPLACED