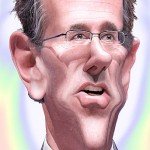 Former Pennsylvania senator Rick Santorum needs to lose the primary race and lose it soon.  Any so-called “conservative” candidate who claims big government is a good thing is NOT a conservative. In a recent news report Rick Santorum was quoted as saying in 2008 “to our credit”, he said, the Republican Party has “morphed away from the Goldwater idea that government just … END_OF_DOCUMENT_TOKEN_TO_BE_REPLACED

Punishing the many for the sins of the few has become the Great Canadian Way.  With each newly passed law, Canadians discover themselves guilty of a myriad of offences they never even knew existed just a generation ago. As a lawful Canadian firearm owner I first came across this notion of  "the many must be punished for the sins of a few" mentality when Canada passed Bill … END_OF_DOCUMENT_TOKEN_TO_BE_REPLACED