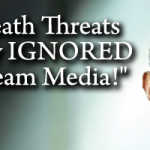 "Obama Death Threats IGNORED by Mainstream Media!" Can you imagine seeing that headline if it were actually true? Never in a million years. No, if anyone were publicly threatening the life of the Pretender-In-Chief, their "Anointed One", they'd be screaming about it from the rooftops. It would make front page headlines in every major newspaper in the nation … END_OF_DOCUMENT_TOKEN_TO_BE_REPLACED

Is it a crime to believe you should actually abide by the oath you took to defend the Constitution? The US government says a resounding YES! Take the case of Oath Keepers... a group of current soldiers, veterans, firefighters and police officers who actually have the audacity to believe in the oath they took to "support and defend the Constitution". Just who do these … END_OF_DOCUMENT_TOKEN_TO_BE_REPLACED