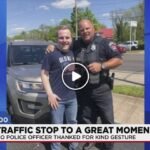 April was Autism Awareness Month in Tennessee and the Murfreesboro Police Department is one of the first departments in the state to deliver autism awareness training to its officers. Little did Officer Terry Spence know that, shortly after his training, he would need to put what he learned into practice. In a story published on April 24, 2021, Officer Terry Spence pulled … END_OF_DOCUMENT_TOKEN_TO_BE_REPLACED