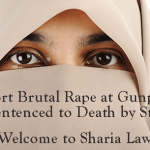 For all those too ignorant and ill-informed to comprehend the evil of Sharia law, I bring you the case of Shumaila, a 19-year-old Pakistani woman brutally raped by her cousin on May 26, 2017. “I could not raise an alarm as Ahmed was holding a gun. But the panchayat refused to accept my statement and declared that I wilfully slept with him,” Shumaila told the police. The day … END_OF_DOCUMENT_TOKEN_TO_BE_REPLACED