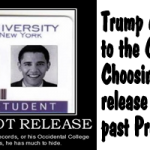 Donald Trump is many things, and even if you dislike the man intensely (as I do) you've got to give him credit for putting his money where his big mouth is. Trump just released a video offering President Obama an incredible deal. If Obama will release his college records and applications and his passport applications and records by October 31 at 5pm Eastern, Donald Trump … END_OF_DOCUMENT_TOKEN_TO_BE_REPLACED