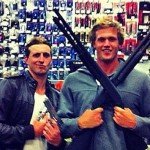 Imagine the scene.  Britain.  The 2012 Olympic Games.  The nation that spawned the documents that guaranteed all subjects of the British Empire such terrible things as Freedom of Speech.  In the wake of what's happened in Australia this week as the world readies for the Games you could be forgiven for not realizing Australia was part of the great British Empire at one tim … END_OF_DOCUMENT_TOKEN_TO_BE_REPLACED