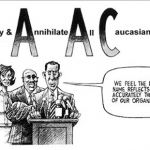 Racism is alive and well in America. It’s thriving, in fact. Just ask Al Sharpton, Jesse Jackson, Eric Holder or Barack Obama. They will all confirm racism is at an all-time high, despite Obama’s election pledge that his America would be colorblind; that racism would be nothing but a footnote in history. Obama’s America is anything but colorblind. Facts be damned… … END_OF_DOCUMENT_TOKEN_TO_BE_REPLACED 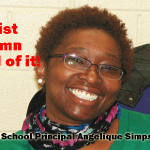 Largo High School Principal Angelique Simpson-Marcus is a racist.  She doesn't fit the Obama mold, of course, since she's black and her racism targeted a white teacher.  It's precisely the opposite of the "racial epidemic" that Obama spews about. Jon Everhart was a good teacher. A good white teacher.  He taught honours English to both juniors and seniors. He consistently … END_OF_DOCUMENT_TOKEN_TO_BE_REPLACED