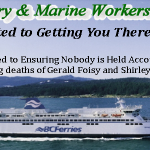 If you need hard evidence that unions and public service don’t mix, consider that one of the people allegedly responsible for the sinking of the Queen of the North in 2006 is only now going to finally face justice. And you can thank the B.C. Ferry Marine Workers Union for the delay. Karl Lilgert was eventually fired for his role in this disaster, but only after his union … END_OF_DOCUMENT_TOKEN_TO_BE_REPLACED