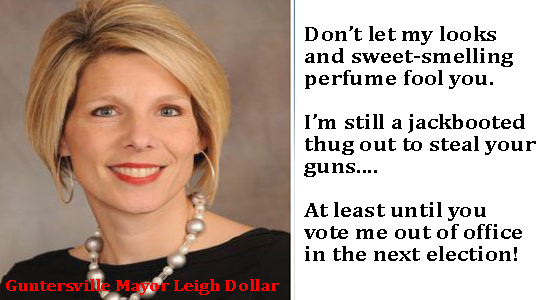 Is there no end to the raft of elected officials who cannot comprehend the oath of office they swear?  You know, those pesky little section where they affirm they will “support and defend the Constitution against all enemies, foreign and domestic”?

It’s a simple phrase and an even simpler concept, yet time and time again we hear of duly elected officials doing the exact opposite of what they swore to do.  Instead, they do their level best to subvert and destroy the Constitution.

Guntersville, Alabama, Mayor Leigh Dollar, despite the shiny and sweet-smelling veneer, does not comprehend Liberty, Rights or Freedoms.  That much is crystal clear.

In February of this year Mayor Dollar proposed to confiscate firearms from law-abiding citizens under the guise of a disaster emergency ordinance.

I have to ask why the priority would be seizing lawfully-owned firearms instead of the obvious… you know… dealing with the actual disaster?

“By no means is it our intent to disarm or seize anyone’s firearms. This is in there to protect public workers and any volunteers helping should someone become unruly–and it can happen because emotions are high–that it would give an officer that authority. And it’s only to protect people. We are not trying to infringe on anyone’s Constitutional authority.”

Her so-called “protection of public workers” stance is a sham.

News of her anti-freedom desire quickly spread, thanks to the internet, where bloggers and social media ensured the flames of Liberty were quickly stoked underneath the moronic Mayor.

One person set up a Facebook page titled “Vote Guntersville Mayor Leigh Dollar Out of Office” and it wasn’t long before the moronic Mayor felt the heat, deciding a hasty retreat was in order.

On February 26, 2013, the Guntersville City Council, tired of the scorn, ridicule and abuse of the citizens they represent, called for a special meeting to remove the despised ordinance from consideration.

Imagine that.  Elected officials listening to the people they are duty-bound to represent and whose Rights and Freedoms they swore to protect.

There is a lesson here for us all, and all the more important because this happened at the local level, i.e. the smallest government and the one closest to we mere citizens.

As I said the other day in response to idiotic school board decisions, we must get involved at the local level so those elected to represent us actually do what they’re supposed to… protect or Rights and Freedoms.

Finally, to the Good Citizens of Guntersville, Alabama, don’t let your mayor and council off the hook.  Just because they, being the good little cowards these people always are, backed down in the face of great public opposition this time, don’t give them a second chance.

At the next election, replace every Freedom-hating councilor and Mayor Dollar with people who will do as their Oath of Office demands: stand up for your Constitutional Rights and Freedoms.

If that means running for election yourself, then do it.  (And please tell me when you do so I can help promote you when the time comes!)