Can the government really steal your bank account without notice?

Virtually overnight and with no warning of any kind, the emergency tax deal was imposed on the people of Cyprus without vote or debate. People ran to ATM machines today only to discover that the taxed amount of their cash had already been frozen.

Monday in Cyprus is a national holiday, the first day of Greek Orthodox Easter.

Nor is this emergency only inflicted upon the so-called rich as even deposits under 100,000 euros will now be taxed at 6.7%.

“If it can happen in Cyprus, it can happen anywhere,” worried British correspondent Anna Grayson told Canada Free Press (CFP) in an overseas telephone call today.

As the citizens of Cyprus discovered over the weekend, the legislation wasn’t even passed before banks seized the cash from depositors.

Over the weekend, Eurozone bureaucrats at a closed meeting came up with a plan. The committee demanded that the government of Cyprus impose a tax of 3% on all bank accounts under $130,000, and close to 10% on all accounts over $130,000. If the government refuses, the Eurozone will not provide a $13 billion bailout for the banks of Cyprus.

The story is all over the European press, for good reason. The Eurocrats had always said that bank accounts would be sacrosanct. This announcement says, “We lied.” But they also assured depositors that this will never happen again. “Trust us.” 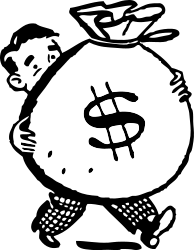 Describing the 9.9% levy on savings over C100,000 and a 6.75% levy on savings below C100,000 as a “one-off levy” would be akin to a caught-in-the-act bank robber saying he was only planning to rob the bank once.  Stealing money from savers then describing it as sacrificing some of their cash holdings, is an outrage.

“That can never happen in Canada!” you say?

If you believe that, well,  then you are not paying attention.

Canadians do not, contrary to popular belief, have any right to private property.  This crucial right was specifically left out of our constitution and, to make matters even worse, the Supreme Court ruled that so long as Parliament makes clear its intention to steal your property then its just fine with them.

The ruling in Authorson v. Attorney General of Canada is very clear.

Lastly, while substantive rights may stem from due process, the Bill of Rights does not protect against the expropriation of property by the passage of unambiguous legislation. Parliament has the right to expropriate property, even without compensation, if it has made its intention clear and, in s. 5.1(4), Parliament’s expropriative intent is clear and unambiguous.

While you may think the theft of funds from the bank accounts of regular Cyprus citizens can’t happen here… it already has and the Supreme Court of Canada upheld the theft.