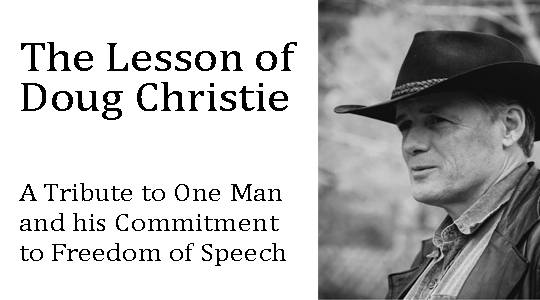 On March 11, 2013, the day I learned of Doug Christie’s death, I was both shocked and saddened by the news even though I knew it was coming. More than that, however, I felt drained and empty knowing we had lost one of the greatest Freedom Fighters in a generation.

Anger burned deep inside me as I the saw the enemies of Freedom and Liberty dance with delight, knowing one of their greatest foes had finally fallen on the battlefield.

In the wake of Doug Christie’s passing I wondered how to best show my appreciation, respect and admiration for him, his accomplishments and also my gratitude for knowing this great and valiant defender of Freedom and Liberty.

It wasn’t until a conversation on Thursday with actor J. August Richards turned to our mutual passion for individual liberty that the answer was revealed. After relating my thoughts on Doug’s passing, a quote I’d heard recently and my thoughts on the two he looked at me, smiled and said simply,

He was correct, of course, and I thank J. August both for our inspiring conversations this past week and for being my sounding-board to get to the answer I needed about how best to honour Doug Christie.

A few weeks ago I received an email with a quote from Helen Keller.  I didn’t know where or when I would use it, but I saved it anyway.  I didn’t realize at the time that this quote was the catalyst for this article or that it would tie so perfectly into honouring the man who so courageously defended our Rights and Freedoms for the past 35 years.

Then Doug Christie passed away and this quote leapt to mind.

This epitomizes how Doug Christie lived his life.

Doug was ever mindful of the awesome and terrible power of the State.  He watched the State crush many a client in its rush to “be right” instead of doing the “right thing”.

There is a difference.

The memory that sticks in my mind is of Doug describing how, in one of his many trips to the Supreme Court of Canada in defense of Freedom of Speech, he sat alone at the defense table on one side of the room while on the other side of the aisle dozens and dozens of government lawyers sat in opposition to him and his client.

“Your Honour,” he recounted, “Do you mean to tell me that every one of these lawyers on the other side of the aisle get the same amount of time EACH as I do?”

“That sounds fair,” he retorted sarcastically. “Thank you for clarifying.” 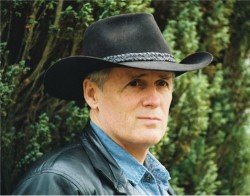 The fact Doug was out-numbered and out-financed by a power-hungry government never seemed to faze him.  Doug Christie knew he was correct, that freedom must prevail and that he was the only man standing between the Almighty Power of the State and his poor client.

Sure, Doug knew the odds were stacked against him, but that awful truth never manifested itself into paralyzing fear. It never prevented him from doing everything in his power to defend his clients, and never more so than when it came to the defense of our precious Right to Freedom of Speech.

“There is Approved Speech, and then there is Free Speech,” he would tell me time and time again.  “In Canada, thanks to the Human Rights Tribunals and hate crime legislation we have only State-Approved Speech.  We no longer have Freedom of Speech.”

I don’t know what sparked the fire deep inside Doug to defend Freedom of Speech.  I don’t even know what sparked his desire to become a lawyer.  What I do know is that very early in his life, Doug Christie decided that he would do the one thing he could do to the very best of his ability, no matter the cost personally or professionally.

He stood on principle.  He believed that Rights and Freedom have meaning.

That is what gave him such strength.  That is what steeled his conviction that the Almighty State must be stopped, no matter the cost.

Doug Christie was just one man.  He certainly could not do everything and he was the first to make that clear, but Doug Christie knew that he could do one thing and do it well: stand for Liberty.

If the life of Douglas Christie taught me anything it is this:

In fact, one person is the only thing that ever has.

Can you or I do everything? Of course not.

There is one thing you and I can each do today to defend our precious Liberty.  It doesn’t need to be epic in scale.  It can be small, even miniscule in size.  That is not important. What’s important is that you and I do that one thing we are capable of today.

Doug Christie spent his life doing that one small thing he was capable of doing.  He did it every single day.

I never once heard him say,

“I don’t have time today, but I will tomorrow.”

The Lesson of Doug Christie, for me, is crystal clear and is epitomized by those words by Helen Keller, another individual who faced enormous challenges in life and never let those challenges stop her:

Doug Christie never refused to do the “something than I can do.”

That is an impressive quality.

So I offer you a challenge: Every day for 1 week I challenge you to do “something that I can do” in defense of our Rights and Freedoms.  It can be anything. Here are just a few examples:

When fear and doubt creep in late at night and the terror grips your heart as the police sirens scream or the sounds of jackboots clap like thunder, steel yourself with the thought that you are not alone; you are not one lone person, defenseless and helpless… you are, just like Doug Christie was, the most powerful force in existence:

One Human Being Standing Against State Tyranny.

I guarantee you Doug Christie will watch over you and he will smile and cheer you on from Heaven while you do. 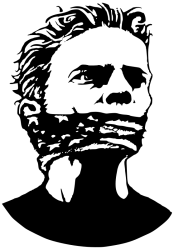 So… To the enemies of Freedom and Liberty I say this:

Enjoy your little happy dance that Liberty’s soldier Doug Christie is no longer on the battlefield… Enjoy your victory while you can for this I guarantee you: your glee at his demise will be short-lived.

Doug Christie dropped the torch of Freedom on March 11, 2013 but it is, even as I write this, being picked up….

I don’t know who they are…

I do not know where they live…

I do not know what preparations they make…

What I do know is this:

We will not be crushed.

We will not be denied the Freedom and Liberty that is our birthright… for the spirit of Doug Christie lives on in each and every one of us who were blessed to know him, even if only for a minute.

You were better off while he was alive, for at least then we slept…