Never let it be said that you can’t make a difference. 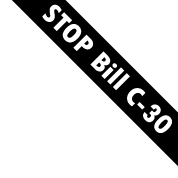 When the Conservatives introduced Bill C-30, titled the Protecting Children from Internet Predators Act, Vic Toews said anyone who didn’t agree with the bill was standing “with the child pornographers”.

In light of that stand, I suppose it’s reasonable to conclude Vic Toews is now standing “with the child pornographers” in the wake his government’s decision to kill off the bill.

In the wake of massive public outcry and social media campaigns against Bill C-30 Justice Minister Rob Nicholson  announced, almost a year to the day Vic Toews introduced Bill C-30 to parliament, he was putting the final nail in the coffin of a bill that would have stripped Canadians of one of their most fundamental Rights: the Right to be Free from Unreasonable Search and Seizure.

Here is an excerpt of the Ottawa Citizen article on this announcement:

Almost one year after introducing its controversial Internet-surveillance bill, the federal government has conceded the measure is officially dead due to public outrage.

Shortly after tabling new legislation that incorporates some of the less contentious elements of Bill C-30 related to emergency wiretaps, Justice Minister Rob Nicholson admitted Monday that the Protecting Children from Internet Predators Act will not proceed.

“We will not be proceeding with Bill C-30 and any attempts that we will continue to have to modernize the Criminal Code will not contain the measures in C-30, including the warrantless mandatory disclosure of basic subscriber information or the requirement for telecommunications service providers to build intercept capability in their systems,” he said Monday.

“We’ve listened to the concerns of Canadians who’ve been very clear on this and we’re responding to that.”

This is great news.

Governments only change direction when they learn it will cost them votes.  Politicians don’t care about anything else.

So the next time your elected officials try implementing more anti-Freedom legislation, make sure they know it will cost them dearly… when we do it’s amazing how fast they stop dead  in their tracks.