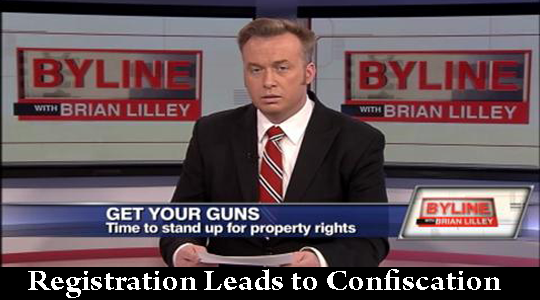 Sun News Commentator Brian Lilley did an excellent segment on how registration leads to confiscation in his January 8, 2013 installment of his show Byline.  In that segment Lilley described the insanity of Ian Thomson being forced to defend himself against criminal charges for the so-called “crime” of defending his life against 4 men trying to kill him.

He went on to show how many Canadians, legal owners of the AP-80, a .22-calibre rifle which happens to share cosmetic similarity to the much-maligned AK-47, were having them confiscated by RCMP bureaucrats right up until the long gun registry was dismantled.

Lilley described how US President Obama will try and implement a national gun registry in America and how that will inevitably lead to confiscation, just as it has everywhere else in the world.

Lilley ends the segment with the ultimate aim of gun-haters worldwide: the utter destruction of anyone who opposes their agenda.

Bruce Montague, as followers of this blog are well aware, is in the process of having the home he built with his own hands seized by the Ontario government under that province’s Proceeds of Crime legislation.

The message is clear.

Oppose the anti-gun agenda and we will crush you like a bug.

Montague served over a year in prison along with another year of probation after being convicted of the paper crime of refusing to renew his firearms license and to obtain registration certificates for his firearms.

Sending him to prison wasn’t enough for the Ontario Crown Prosecutors though.  They needed to make an example of Montague so that no other firearm owners would dare step out of line.

Using civil asset forfeiture legislation designed to attack drug dealers and gangs, the Ontario Government started proceedings to seize the Montague family home.  That is wrong from every imaginable angle yet the Ontario government is, so far, quite content to harass and destroy a man who has already paid his full debt to society for his paperwork “crimes”.