A 21-year-old man was wounded and arrested after he first disarmed and murdered Rainier Oregon Police Chief Ralph Painter. The scene? a car audio store in a mall. Painter had responded to the burglary call.

Early reports say a struggle happened where the 21-year-old Daniel A. Butts [allegedly] disarmed the Chief and murdered him with his own sidearm.

Rainier isn’t a big place, so pretty much everyone knew Chief Painter.  The town is understandably in shock at his senseless loss. 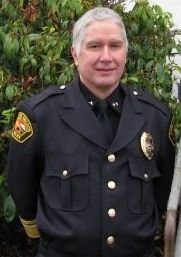 I don’t know what this young man was thinking… but clearly he wasn’t thinking very clearly.  Getting busted for burglary surely must be better than going to jail for life for murdering a cop.

Apparently not for this young man, who is, by my estimation, really lucky to be alive at all.   Lord knows I wouldn’t have blamed the other responding Rainier police men and women if they’d just killed the little bastard right then and there.  Thankfully for him, they were more restrained than that, and after he was wounded he was taken into custody.

Early reports are that Butts will survive.  Pity.

Has life in North America become so cheap that we’re willing to kill a police chief over a stolen car stereo?  I sure hope not.