The War on Childhood began in earnest this year.  I guess the Nanny State Social Engineering Corps didn’t want to take any chances a single child may actually act like, you know, a child this year. 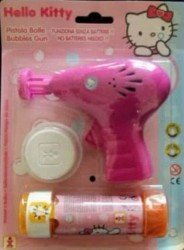 First Stop: Mount Carmel Area Elementary School in Mount Carmel, Pennsylvania, where a kindergarten girl was suspended from school for “making terroristic threats” to a fellow classmate.  Here, Goons of the State terrorized, or as they call it “interrogated” the 5-year-old child for over 3 hours without her parents knowing about the incident or the abusive treatment of their daughter.

Her “Hello Kitty Bubble Gun”, pictured here, wasn’t even in the poor girl’s possession at the time of the so-called “terroristic threat”, yet that didn’t stop hyper-vigilant lunatics of the Nanny State from hyperventilating into overdrive.

Her suspension: 10 days.  After sending the poor girl to a psychiatrist for “examination” they kindly reduced her prison term to 4 days.

Second Stop: Roscoe R. Nix Elementary School in Silver Spring, Maryland, where a 6-year-old boy was suspended after committing the heinous crime of acting like a little boy… pointing a finger as someone else said “Pow!”

Young Rodney Lynch is the epitome of a normal and healthy little boy, yet the school system in Silver Spring, just like in Mount Carmel, has lost its collective mind and freaked out over a kid acting like a kid.

His suspension: 1 day. His crime: being a boy.

Third Stop: Talbot County, Maryland, where two 6-year-old boys were suspended from school for the heinous crime of playing “Cops and Robbers”.  Naturally, during the course of the game fingers were pointed and that most evil of words was shouted aloud: “Bang!”

There were no guns, of course, nor was there any common sense to be found from school staff and administrators.

Thanks to the morons at the Nanny State Social Engineering Corps, being a child is no longer an option. One must now act like an adult from the earliest of ages, lest the State Snitch Squad catch you playing and report you to the Federales.

So, I send out this warning to children large and small… know that no matter how much you want to act like a kid and just have a little fun, don’t do it!

The Goons of the Nanny State are EVERYWHERE just waiting to pounce on you the instant you point that dangerous index finger at anyone… and God forbid you utter a sound while you do that… or it’s off to the Nanny State Slammer with you!