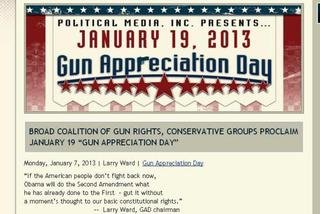 Today is the day millions of Americans will show their support for the Second Amendment of the Constitution of the United States.

On January 19, 2013 go to your local gun store, gun range or gun show with your Constitution, American Flags and your ‘Hands off my Guns’ sign to send a loud and clear message to Congress and President Obama.

After you’ve done that, make sure those who oppose private firearm ownership by we mere citizens know you will do everything in your power to stop these yahoos in their tracks.