This case sucks. I mean it really sucks. Some slimebag decided New Year’s Day is a good day to shoot up his neighbour’s trailer.  The neighbour called the police.  Go figure.  That’s where it gets really bad, really fast.

Deputy Suzanne Waughtel-Hopper was apparently the first on the scene.  She’d been sent there by dispatch after the report of shots fired came in.

She was approaching the trailer, which she thought was empty, when the so-far unidentified male opened the door and shot her in the face with a shotgun.

It was an ambush.  She never stood a chance.  She was dead before she hit the ground.

Other deputies converged on the trailer and a gun battle ensued.  SWAT teams were called in, and law enforcement officers from five separate police departments ended up on scene.

I’m not a cop, but I cannot imagine anything coming over the radio that would terrify more than the “Officer Down” call.

Now, don’t get me wrong… every “officer down” call is horrible.  This one 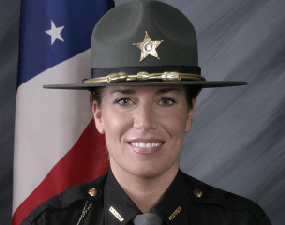 though, really saddens me.   I guess it’s because of the backstory I discovered about Suzanne’s life.  She’s got two children, and she just got married.  Something about that really just makes me incredibly sad.

About the only happy thing about this entire case is that the scumbag who shot her didn’t last the day.  The last reports I found were unclear about whether he’d killed himself or other deputies had done him in.  Either way, who cares.  At least he’s dead, and Suzanne’s family can get on with grieving her tragic and senseless death, and not have to suffer through a trial for this piece of crap.

My apologies to anyone related to this piece of crap, but I’m glad he’s dead.  He deserves it, where Suzanne most certainly did not.