Congresswoman Sheila Jackson Lee – How did this gun-hating bigot get elected in Texas?

Texas, at least in my mind, is the one place where the Liberty mindset still resides in America.

The famous phrase “Don’t Mess With Texas!” is one I’ve heard more times than I can even remember and it instills in me a sense of pride, knowing there is a place on the planet where stupidity can’t take root.

My own memories of Texas back in the late ‘80s are some of the fondest memories I have, and the people I met there were proud, Liberty-minded folks who would give you the shirt off their backs if that’s what you needed.  Those Texans were some of the finest human beings you could ever hope to meet.

Given that experience, when I see a chucklehead spouting off on the evening news that Americans should “just turn in your guns”… the very last place I would think this chucklehead calls home is Texas!

Yet, sadly, that’s precisely the case.

The chucklehead I’m referring to is Congresswoman Sheila Jackson Lee, a Democrat (I’m shocked!) who somehow managed to get herself elected in the Lone Star State despite her misguided notions of what Texas and Liberty stand for.

“I would personally just say to those who are listening, maybe you want to turn in your guns,” she said.

“Oh no, I’m not going to take your guns. But look at what Dick’s Sporting Goods did … they wanted to be part of the solution and part of America,” she added.

Ah yes, the beauty of “the politics of inclusion” where you’re only included if you agree with Liberal stupidity.

The implication this woman is making is quite clear.  If you own guns, you’re no longer “part of America“.

If you’re not offended by that, please check your pulse.

Sheila Jackson Lee clearly has never read the United States Constitution, nor did she comprehend a single word of the Oath of Office she swore… you know… that pesky little statement where she swears to support and defend the Constitution against all enemies, foreign and domestic…

Congresswoman Sheila Jackson Lee is offensive to everything America stands for.  That she calls Texas home only heightens that offensiveness.

As for Dick’s Sporting Goods, they are not “being part of the solution”, they’re pandering to political correctness.

“Out of respect for the victims and their families, during this time of national mourning we have removed all guns from sale and from display in our store nearest to Newtown and suspended the sale of modern sporting rifles in all of our stores chainwide.”

What Dick’s Sporting Goods is saying by “boldly” stating they will no longer sell “modern sporting rifles” to law-abiding Americans is an insult to any rational human being.

A mentally-ill criminal went on a murderous rampage in Newtown, Connecticut, and Dick’s Sporting Goods solution is to hold every single law-abiding person in America responsible for that crime.

That is insulting.  That is offensive.

Any company that willingly vilifies hundreds of millions of innocent people for the heinous crimes of one mentally-ill criminal is not a company I want anything to do with.

They will never see a single penny of my hard-earned cash, and I would suggest they never see a penny of yours either.

By straddling both sides of the fence they show themselves for what they are: cowards terrified of their own shadows willing to pander to the very forces that would put them out of business.

I’ve said it before and I’ll say it again:

We didn’t shoot anyone today.

We’re not going to shoot anyone tomorrow, either.

And we’re NOT going to stand idly by while Constitution-haters like Congress-Critter Sheila Jackson Lee and the cowards at Dick’s Sporting Goods try and hold us responsible for the crimes of others. 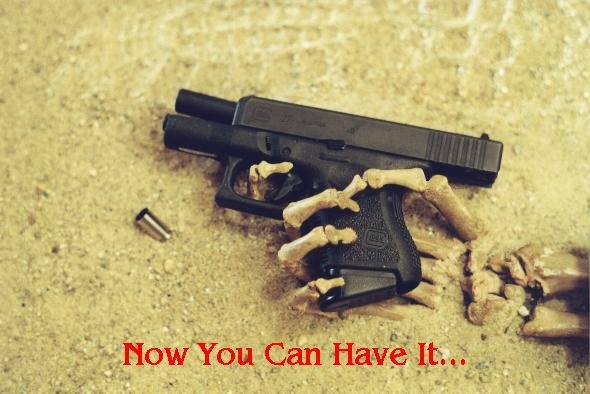