Does anyone aside from me find it bizarre that the mainstream press utterly ignores shootings where the would-be mass killer is stopped by a good guy with a gun?

The restaurant and theatre shooting in San Antonio, just 2 days after the school shooting tragedy in Connecticut, is basically a ghost story as far as the mainstream media is concerned.  Outside of “pro-gun” circles, it’s practically unheard of.

Those of us who comprehend the only thing that stops evil in its tracks is a good guy with a gun, or in the case of the San Antonio theatre shooting, a good girl with a gun, believe this case should be front page news in every newspaper in the nation.

An unidentified woman was on guard at the Santikos Mayan Palace 14 theater complex the night of the shooting so when the armed moron, who had just shot his ex-girlfriend in the restaurant next door, entered the theatre to see who else he could shoot, he found his own body riddled with bullets instead.

Needless to say, he didn’t shoot anyone else after that.

Because a trained woman with a firearm in hand refused to allow any more innocent bodies drop that night. 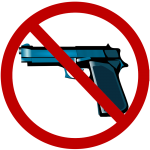 That’s also why you won’t hear this story anywhere on the mainstream media… there was no trail of dead bodies for the news cameras to follow; no spilled blood for the newscaster to bathe in while she weeps, wails and whines all while proclaiming “the gun” caused this awful tragedy.

The heroic woman, an off-duty Bexar County police officer, is being honored for her brave and life-saving actions but, as I said, you won’t hear about her or the award she is receiving on the evening news.

A woman stopping a mass shooting isn’t news.  Only a high body count that gives a biased news media a platform to advance their anti-gun agenda is news.  Only another thoroughly preventable tragedy inside one of their glorious Gun-Free Zones is worthy of the national media’s attention.

This woman and her story should be front-page news across America, but it is not.  Sadly, the only people who will ever even know about her and what she did that fateful night in December are the good citizens of San Antonio honoring her, and good folks like me and perhaps you who are reading this article.

The mainstream media will continue to totally ignore this woman and her heroism… all because there is no body count and therefore no story… at least in their sad and pathetic little minds.

You’d think the fact that there was no body count, that a mass murder was avoided, would be proudly trumpeted from the rooftops, yet it is not.

Instead we glorify mass murder and vilify or ignore those who prevent it.

That truly is a national tragedy and a disgrace for the profession of journalism across America.