As I wrote the other day in “And the 2012 Hypocrisy Award goes to…“, anti-gun hypocrites believe guns in their hands (or the hands of their publicly-funded security agents) are absolutely fine… it’s guns in the hands of we mere citizens that they think are the big problem.

The gun-banning fanatics insist that if we just took all the guns guns away from those regular folk the world would be a safer place.

Now, let’s set aside the obvious hypocrisy of the folks proposing this since, as I said, they have their armed guards and protection details 24×7… and without defensive firearms you and I are left with just ourselves and 911.  Dialing 1911 would no longer be an option.

You’d think that if these people truly believed that Gun-Free Zones saved lives, they would happily proclaim their homes as such at every opportunity.

How come these prattling yahoos never place this sign on their front door?

Could it be they don’t actually believe it themselves?

You’d think they would insist the school their child attends is a Gun-Free Zone, but that’s just not the way it works… is it.  No, their children go to schools where armed security agents are the norm.  It’s only your children these morally-bankrupt cretins believe should remain defenseless inside government-mandated Gun-Free Zones.

Like I said… Hypocrites!  Every last one of them.

So, to the Windy Wendy Cukiers, the Sarah Bradys and the Nancy Pelosis of the world… I dare you to post this sign on your front door and demand every one of your supporters do the same.

Or are you simply too cowardly to put your own safety where your loud, ill-informed and hypocritical mouths are? 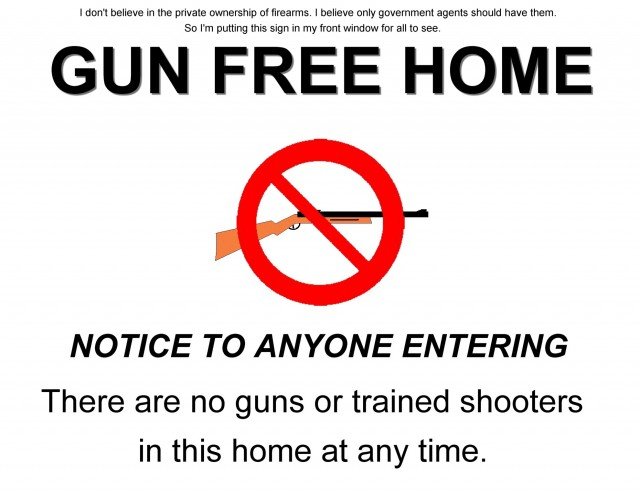