That’s just not good news. Not good at all. 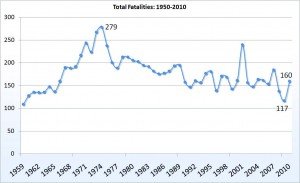 Following a two year decline, law enforcement fatalities in 2010 spiked to 160. This was an increase of nearly 40 percent compared to last year, when 117 officers were killed in the line of duty. Preliminary data from the National Law Enforcement Officers Memorial Fund show that for the 13th year in a row, traffic fatalities were the leading cause of officer fatalities, with 73 officers killed in the line of duty—an increase of 43 percent from 2009.
Of the 73 traffic-related fatalities in 2010, 50 officers died in automobile crashes, 16 were struck and killed by automobiles while outside of their vehicles, 1 died in a bicycle accident, and 6 died in motorcycle crashes.
Firearm fatalities increased 20 percent, from 49 deaths in 2009 to 59 in 2010. Even more alarming, multiple fatality shootings accounted for nearly 20 percent of all fatal shootings. Five incidents occurred in: Fresno, CA, San Juan, PR, West Memphis, AR, Tampa, FL, and Hoonah, AK, accounting for 10 officer deaths.

Firearm deaths were also up.  In 2010, 59 officers were killed by firearms, up ten from the year before.  While that’s alarming in itself, it’s even more alarming when we look at a longer timeline.  From the report:

In 2010, firearm-related fatalities climbed to 59 line of duty deaths, 20 percent higher than in 2009 when 49 officers were killed. While the 2010 total was high compared to the rest of the decade, fatal shootings have decreased more than 45 percent since the 1970s.

That’s really scary.  When you look at the graph (above) you’ll see what I mean.  In the mid-70’s officer deaths reached their apex, with 200 or more officers being killed in the line of duty every year for 11 out of 12 years in a row.

The way I read the report, it looks like it only reports the deaths of those officers killed while on duty.  So it won’t include the deaths of men like Patrick Sirois, who was killed helping a stranded motorist while he was on the way to his family Christmas gathering.

Granted, those deaths are harder to track, I’m sure, but the sacrifice made by men like Patrick Sirois are no less heroic.  If anything, they’re more, because Patrick gave his life with the full knowledge he was doing it to save someone else.

That aside, it’s truly scary that we have that many police officers killed while on duty in the United States.

Here in Canada the numbers are not quite as scary.

According to OfficerDown.org, which also tracks the deaths of police officers here in Canada, there were only 7 in the line of duty police deaths in 2010, up from 4 in 2009.