Americans had, up until just a few days ago, rights guaranteed under the United States Constitution.  That obviously bothered US Lawmakers, who stripped the National Defense Authorization Act of 2013 (NDAA) of one very important amendment: the one ensuring that American citizens and any persons in America legally would be assured a jury trial.

A number of senators from both parties, including Senator Rand Paul (R-Kentucky)  were horrified that the amendment prohibiting the military detention of US Citizens on US soil was stripped from the bill.

The committee in charge of this is none other than Senator John McCain (R-Arizona).  You’d think, that as a former prisoner of war, he’d appreciate the niceties of Constitutional Rights, but alas, that is not the case.  McCain is every bit the socialist coward as his former captors.

Rand Paul blasted McCain and the rest of the committee for stripping out the amendment that would have protected our civil rights.

“We had protection in this bill. We passed an amendment that specifically said if you were an American citizen or here legally in the country, you would get a trial by jury,” Rand Paul said.

“It’s been removed because they want the ability to hold American citizens without trial in our country. This is so fundamentally wrong and goes against everything we stand for as a country that it can’t go unnoticed.” 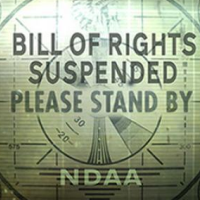 If you thought you lived in a free country, think again.

Free nations don’t allow their citizens to be imprisoned indefinitely without trial.  That special privilege is reserved for such bastions of freedom and liberty as the Communist Republic of China or Soviet Russia.

Rand Paul went on to say,

“When the government can arrest suspects without a warrant, hold them without trial, deny them access to counsel or admission of bail, we have shorn the Bill of Rights of its sanctity.”

Welcome to the United Socialist States of America… formerly known as the Land of the Free, Home of the Brave.

“Our Bill of Rights is not something that can be cherry-picked at legislators’ convenience. When I entered the United States Senate, I took an oath to uphold and defend the Constitution. It is for this reason that I will strongly oppose passage of the McCain conference report that strips the guarantee to a trial by jury.”

If only we had more elected representatives like Rand Paul who take their Oath to protect and defend the Constitution against all enemies, foreign and domestic, seriously.

Clearly it’s time for Oathkeepers, who do such an amazing job educating our police and military about the seriousness of their oath to the Constitution, to take its education program to the elected class as well.