On Wednesday, December 19, 2012 Arthur Topham was back in the Quesnel, BC, Court house for his latest attempt at a bail hearing. The regular Judge presiding over Arthur’s case was unable to attend so a female judge, M. Church, heard the application instead.

Crown Council Jennifer Johnston opened by giving Judge Church a brief overview of the case, including Crown’s reasons why she has still not provided Topham’s lawyer, Douglas Christie, with full disclosure in the case.

She claimed that almost 5 months from the time of Arthur Topham’s arrest on May 16, 2012 until October 9, 2012 was insufficient time to gather enough evidence for an indictment against Mr. Topham. She also claimed this somehow justified not providing Mr. Christie with full disclosure, despite two previous promises to the judge to do so.

Mr. Topham had received a disclosure document from Mr. Christie that was not marked confidential in any way. Mr. Topham shared this document with a friend via email and portions of that document subsequently were found in an article in the National Post. According to Crown Council Jennifer Johnston, this is why she refused to divulge any more disclosure documents to Mr. Christie. 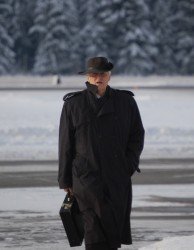 Lawyer Douglas Christie in Quesnel, BC

The issue of the leaked disclosure was addressed first and Mr. Christie told that Judge that he would have no problem with the Court issuing an Order stating that in future neither he nor Arthur Topham would disclose any confidential information to any third parties not directly connected to the case, and definitely not for publication.

Doug Christie then commenced his argument by referencing a host of case law where he outlined for the Judge many precedents for the legal right of publishers and writers to criticize both Jews and Zionists. Christie cited articles in mainstream publications, such as the New York Times, making the point that no particular group is exempt from public criticism.

Regarding Topham’s criticism of the RCMP, Doug Christie pointed out to the court the RCMP is certainly not above criticism and, given their current atrocious public image, he didn’t think Crown’s argument in defense of them was even worthy of consideration.

Lastly, he also made it clear that Crown’s attempt to curtail Mr. Topham’s Charter Rights to Freedom of Expression before he was even convicted of any crime was absurd. To a priori assume that whatever Mr. Topham is publishing is “hatred” and then ask the court to impose such a severe curtailment upon his Charter rights should not even be considered in Canada.

Doug Christie concluded his arguments approximately 4:15 p.m., at which time he informed the Judge he had a plane to catch at 5 p.m.

The Crown tried to refute all of Mr. Christie’s arguments and told the Judge that because Mr. Topham was charged with a “hate crime” the Crown could impose whatever restrictions they wanted on him.

The Judge reserved her decision, telling both sides she would consider the arguments and submit a request to another body (it is not known which body she meant) for further clarification in early January, after which she would notify Crown and Defence of her decision.

This state of affairs leaves Arthur Topham free to exercise his Right to Freedom of Speech for the moment, as well as to access the internet.This is good news, if only temporary, but there is a long legal battle ahead for Mr. Topham.

If you are able, please mail a donation in support of his Right to Freedom of Speech to:

To support Arthur Topham’s fight against our “hate” laws and Internet Censorship via PayPal, please go to either http://www.radicalpress.com or http://www.quesnelcariboosentinel.com. The PayPal button is in the right hand corner on either site.