When you read today about Adam Lanza having ‘trouble relating’ to fellow students and teachers, ask yourself this question: what is the standard definition of a psychopath?

“a person with a psychopathic personality, which manifests as amoral and antisocial behavior, lack of ability to love or establish meaningful personal relationships, extreme egocentricity, failure to learn from experience, etc.”

Sound familiar? It should.

“He would have an episode, and she’d have to return or come to the high school and deal with it,” Novia said, describing how the young man would sometimes withdraw completely “from whatever he was supposed to be doing,” whether it was sitting in class or reading a book.” 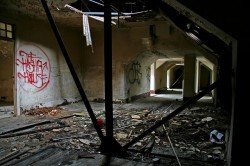 In other words, Adam Lanza suffered from psychotic episodes and exhibited other characteristics that closely matched the definition of a person with a psychopathic personality.

In the old days, and by this I mean forty years ago, Adam would likely have wound up in an institution like the one pictured here, the Male Chronic Unit of Riverview Mental Hospital in Vancouver.

The reason he didn’t is that since the 1970’s, Progressive do-gooders, educators, lawyers and activists have convinced the public mental patients should be ‘treated’ in the ‘community.’ Governments were only too happy to oblige since this reduced their costs and they were seen to be, yes, ‘progressive.’

Progressives like this idea because they are morally relativistic; they believe all people are the same when it’s clear this is not the case, and especially not the case with people suffering mental illness.

That is one reason the media hasn’t got its head around. Here’s another: Adam’s father, Peter John Lanza, divorced Adam’s mother in 2009, three years ago. That would mean Adam was 17 at the time. We know statistically that children from divorced households are more likely to be involved in crime than children from families with two strong parents.

“Children from single-parent families are more likely to have behavioral problems because they tend to lack economic security and adequate time with parents.”

Whether Peter John Lanza could have turned Adam around is problematical, but whether he recognized Adam had a problem is not. You can’t live with a dis-associative personality for 17 years and not know about it. Of course, if you aren’t living with that personality, you don’t know about it, do you?

And now a third point; gun-free zones. Progressive educators believe in this concept because they don’t understand that mentally disturbed people don’t care about social engineering.

The only thing that stops a madman is a man (or woman) with a gun. There have been a number of such cases in the United States but none of them have received any publicity. The reason they haven’t is that this contradicts the liberal talking points that guns cause crime.

I mentioned the Israeli example yesterday; a nation that armed its school teachers and let parents sit in class with fully-automatic weapons to protect their children, but this is also never mentioned by the Main Stream Media. Why would it? They oppose the idea in principle.

On this Sunday, when fewer and fewer people go to church, feel religious or understand Judeo-Christian morality, it’s time we reminded each other that the key to personal safety, school safety and safety in society is a strong sense of morality, a strong belief in family and an understanding that there is evil in the world and always will be.

Everyone has to take personal responsibility for security, their own and certainly that of their children.

What we saw in Newtown, CT, shows the cost of being wrong again and again.