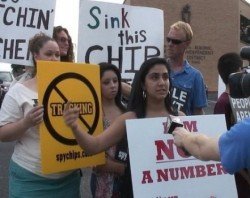 Andrea Hernandez just wants to get an education.  She is, by all accounts I can find, a good student.  She’s also a human being who understands we must never allow ourselves to be tracked like pieces of meat in a grocery store.

Andrea Hernandez decided that when her high school issued mandatory RFID-enabled high school ID cards, she would not be a sheep. Andrea Hernandez objects to the tracking chip for many reasons, including her personal right to privacy and also for religious reasons.  For that Andrea is to be commended.

Andrea, backed by her parents, wrote a letter to the school expressing her Christian religious objections and was promptly told by school officials that “there will be consequences for refusal to wear an ID card.”

As a result of Andrea’s determination to be a free American citizen, her high school threatened to kick her out.  For that, the bureaucratic thugs at John Jay High School ought to be ashamed of themselves.

In today’s Brave New America we are absolutely intolerant of individuality.

John Jay High School is one of many schools who want to track students’ every move inside school facilities.  Why is beyond me, since kids have managed to get educated for centuries in America without being tracked like… well, like pieces of meat.

It makes sense to track pieces of meat through our food supply chains.  Should something go horribly awry at the meat processing plant we can track down each and every bit of contaminated cow and destroy it.

But tracking the movements of kids throughout the school, every minute of every day?  Is this really necessary?

Unconditional obedience to the State is not an American value.  In fact it’s the exact opposite of an American value, and that’s precisely why the incessant tracking of our children must be fought everywhere it rears its ugly Nanny State head.

Once found, that head should be cut off and mounted on a stick for all the world to see, perhaps with a sign underneath that says “Liberty Lives Here”…

In reality, this isn’t actually about tracking the kids at all.  Not really.  It’s about money.  Government money.  And being good little bureaucratic minions, the San Antonio School District wants more government money.  The path to that mythical pot of gold runs directly through student attendance records.  The more kids they can prove are attending class, the more money they can beg from the government, hence the intense push to track the movements of every single student in John Jay High School.

The Rutherford Institute took on Andrea Hernandez’ case and filed a temporary restraining order against the high school.  A Bexar County judge agreed, and for the moment Andrea is “allowed” to attend classes without the mandated RFID chip tracking her movements.

“The court’s willingness to grant a temporary restraining order is a good first step, but there is still a long way to go—not just in this case, but dealing with the mindset, in general, that everyone needs to be monitored and controlled,” said John W. Whitehead, president of The Rutherford Institute.

“Regimes in the past have always started with the schools, where they develop a compliant citizenry. These ‘Student Locator’ programs are ultimately aimed at getting students used to living in a total surveillance state where there will be no privacy, and wherever you go and whatever you text or email will be watched by the government.”

This restraining order is only a temporary measure, however, and there is a long legal road ahead of Andrea and the Rutherford Institute.

If you feel strongly about the issue of personal privacy and wish to support Andrea Hernandez’ case, please contact Nisha Whitehead at the Rutherford Institute directly.

There is one final tidbit of hypocrisy to report, of course.

School officials quietly tried bribing Andrea Hernandez with an uninterrupted education if she would just wear a badge that did not contain the tracking chip so everyone would see her “compliance” with the Student Locator Project, as it’s so lovingly called.

My question is the obvious one, of course.

If it’s okay for Andrea not to wear the tracking chip ID card, why should everyone else wear one?

Oh silly me.  What was I thinking???  Think of all the money they’ll lose of every student refuses to comply, just like Andrea!

How will we train kids to be good little automatons if we allow them to think for themselves, protect their personal privacy and have their own thoughts on religion?

How very anti-Nanny State of me.

I’m sure the censors will be coming for me shortly…