In the midst of the Geoff Mantler police brutality trial it’s  easy for us to forget that not all cops are brutal thugs with badges and guns who believe they are above the law.

Some police men and women are actually, believe it or not, genuinely decent and honourable human beings. 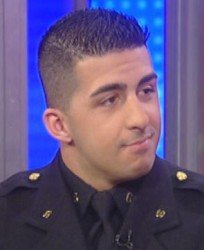 One such decent and honourable police officer is NYPD Officer Larry DePrimo and were it not for a photograph taken by an Arizona tourist, the world would never have known what Larry DePrimo did for a homeless man one bitterly cold winter night.

Jennifer Foster of Florence, Arizona, was in New York with her boyfriend when she witnessed DePrimo’s act of generosity and kindness.

Officer Larry DePrimo gave a homeless man a pair of all-weather boots and thermal socks so his feet wouldn’t freeze.

In part, what motivated DePrimo was the rude and insensitive behaviour of some passersby.

They mocked and ridiculed the homeless man and his bare feet.

“It was extremely cold that night,” DePrimo told Fox News on Friday. “I just knew I had to help him.”

DePrimo, an NYPD police officer for under 3 years, downplayed his act of kindness.  But he keeps the receipt for his purchase of boots and socks for a homeless man inside his bulletproof vest… a reminder that there is always someone less fortunate than he is.

NYPD Officer Larry DePrimo is an example every police officer should strive to emulate.  RCMP Constable Geoff Mantler… not so much.

Oh, that some of our own RCMP members could act with a tiny fraction of the decency shown by this NYPD officer…