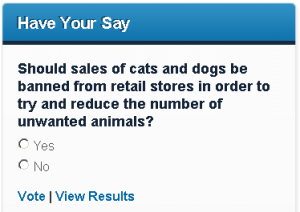 The ever ban-happy Toronto Star now wants to ban retail sales of cats and dogs.  What morons.

A retail store that sells pets pretty much guarantees one thing:  the person purchasing the pet, the person putting down their hard-earned and much-taxed cash for a pet isn’t very likely to be the person who doesn’t want said pet.

But the Toronto Star has decided there is a problem, and the solution, as it always is for these government-hugging, cradle-to-the-grave-childcare-loving  morons is simple: Ban It!

After all, that worked so well with drugs, right? Obviously there’s no drug problem any more.  The Toronto Star said so.

What will these fools come up with next?  Banning cats from having kittens?

Can you even believe the results?  76% of almost 9,000 people voted FOR banning retail sale of pets.  That’s a lot of stupid humans. 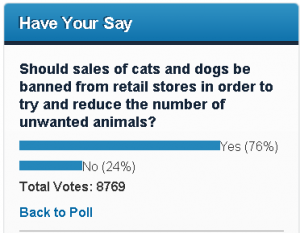