Malala Yousufzai is the 14-year-old girl who was shot in the head on October 9, 2012 by Taliban terrorists intent on sending a message to any young girl who, like Malala, thought she deserved to know how to read and write.

The Taliban, known to anyone in the thinking world as lunatic misogynists, decreed that Malala must not be educated nor advocate for other girls to be educated.

To send that message to all Pakistani girls, they sent one of their “enlightened” disciples to shoot a 14-year-old girl in the head.

They are nothing but barbaric thugs.

Malala’s dream was to be able to read “Robinson Crusoe”.   It was Malala’s dream to make her world better than the world her mother grew up in.

But beyond any of the mundane and practical reasons Malala became the face of advocating for female education in Pakistan, this young girl taught the entire world a profound lesson. 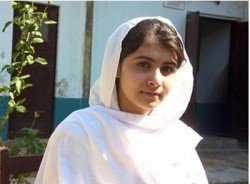 One human being can change the world.

To paraphrase Margaret Mead’s famous quote, one person is the only thing that ever has changed the world.

Malala’s work to ensure that she and other Pakistani girls could get an education is now unstoppable.  By shooting this girl in the head in their pathetic attempt to silence her, the only thing the Taliban cowards accomplished was to guarantee Malala’s work will be successful.

By attempting to assassinate her, they made her a worldwide hero and gave an international voice to her dreams.

One man is working hard to see Malala receive the Nobel Peace Prize for her efforts to bring the Muslim world into the 21st century.

Tarek Fatah created a petition on Change.org to garner support for his idea.  In no time at all Tarek succeeded in getting the leaders of all the major Canadian political parties on side, including a public declaration of support from Prime Minister Harper.

UPDATE: We did it! We accomplished our first goal. On November 21, Prime Minister Stephen came out in support of the petition (see tweet below) and now every single federal party leader has joined the campaign and have nominated Malala for the Nobel Peace Prize.

Please continue to sign my petition and share it with your friends. This will encourage other world leaders to also nominate/endorse Malala and push the Nobel Foundation to give Malala the 2013 Nobel Peace Prize.

Here is a sample letter from Tarek’s petition page.

On October 9, 2012, 15-year old Malala Yusufzai was shot in the head by a Taliban gunman in response to her campaign against the destruction of girls schools in Pakistan. In the face of terror, Malala risked her life to speak out for the rights of girls everywhere. Malala’s bravery has sparked a global movement and we believe the Nobel Foundation should give her the Nobel Peace Prize.

A Nobel Peace Prize for Malala will not just honour her courage and resolve, but also send a clear message to the Taliban terrorists that the world is watching and will support those who stand up for gender equality and universal human rights that includes the right of education for girls.

While the first ‘Nobel Prize for Malala’ petition was started in Canada, almost half the people who have signed the petition come from countries around the world. Now people are setting up this same petition in their own country asking for their political leaders to come together to nominate Malala for the Nobel Prize.

Nominators and endorsers so far:

Send your letters urging Prime Minster Harper to nominate Malala Yousufzai for the Nobel Prize to: