Buddy Tavares is the man who was brutally kicked in the face by RCMP Constable Geoff Mantler on January 6, 2011.  A Kelowna reporter happened to be there at the time and recorded the entire thing on video.  That video went viral and public outrage and condemnation of Mantler’s apparent over-reaction was swift.

In the wake of the Mantler video showing what seems to be blatant police brutality, two other  Kelowna-area men came forward with their own complaints about RCMP Constable Geoff Mantler. 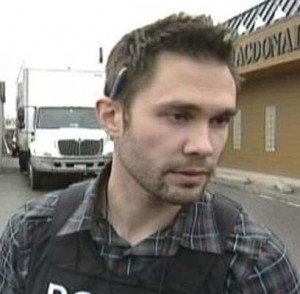 In one case the Crown declined to press charges against the rogue RCMP constable, but they moved forward with charges in the second case.  In that case, despite the judge saying on record that he didn’t believe Mantler’s testimony and believed he was indeed responsible for the injuries sustained by Manjit Singh Bhatti, Provincial Court Judge Mark Takahashi acquitted Mantler on all charges.

It was an outrage, but an expected one, especially in the wake of another RCMP member being slapped on the wrist for the crime of killing a man.  Former RCMP Constable Monty Robinson was found guilty of obstruction of justice in the death of Orion Hutchinson, but the judge in that case felt sending Robinson to prison would be too harsh a crime for the killer who did everything he could to obstruct the investigation into his actions.

Robinson was sentenced to 30 days house arrest shortly before the verdict came down in Mantler’s first police brutality trial.  In the wake of that pathetic sentencing, there was no doubt in my mind that Mantler would get off.

Here we are in another police brutality trial with video evidence, and even the victim of that crime doesn’t believe actual justice will come out the other end of the “dog and pony show” that is Mantler’s trial.

Buddy Tavares told reporters he fully expects that Geoff Mantler will be acquitted.

I’d like to have more faith in the Canadian justice system than Buddy Tavares does, but alas that isn’t possible.

When an RCMP member can kill a man, lie about it, drink more so he cannot be charged with impaired driving and uses all his police training to ensure he will never have to face justice and succeeds…  it’s hard to believe there is any justice to be found inside a courtroom when an RCMP member is the one on trial.

Perhaps Mantler will actually be convicted though, and this will be the case that turns the shattered faith in our justice system around…  God knows something has to.