When I heard the news earlier today that all charges against Moses Mahilal were dropped I was both shocked and elated at the same time.  It’s incredibly uncommon for Ontario Crown Prosecutors to do the right thing… or to be more specific, to correct the injustice they have already perpetrated by laying charges against the victim of a crime in the first place.

As you may or may not remember, Moses Mahilal lives with his girlfriend Sarah Walsh and Sarah’s mother Kimberly Walsh in Etobicoke, Ontario.   In July 31, 2011 the couple came home late to discover the door open and an unknown pair of shoes at the bottom of the stairs.  Upon further investigation and after grabbing a kitchen knife to defend himself, Moses found the home invader hiding behind Sarah’s mother’s bedroom door.

A fight ensued and the home invader, one Kino Johnson, was stabbed a couple of times before running away.  He was ultimately arrested by police, yet Crown prosecutors wasted no time taking the wounded home invader’s word as Gospel before charging Mahilal with a crime: aggravated assault.

If convicted Moses Mahilal could face up to 14 years in prison. That’s a serious penalty for the “crime” of defending yourself and your loved ones from a repeat offender like Kino Johnson.

Johnson had previously been convicted of break and enter five times before this.  God only knows how many crimes like this he had committed but wasn’t convicted of.

As I wrote back on September 4th under the title “Ontario’s Crown prosecutors insist upon confusing self-defense with assault“,

Imagine you are out with your girlfriend for the evening.  You have a lovely time together and come home in the wee hours of the morning, only to find your front door wide open.  Your girlfriend’s mother lives with both of you so your concern for her safety immediately goes into overdrive.

This being Canada you’re not legally allowed to carry a firearm, so you run to the kitchen and arm yourself with a kitchen knife, the only defensive tool close at hand.  While you hear nothing, your girlfriend’s mother’s bedroom is upstairs and as you round the corner you stare in horror at what’s sitting at the bottom of the stairs.

In a bizarre twist your home invader has had the courtesy to take his shoes off before ransacking your home.

God only knows what could have happened had you not arrived home when you did.

You call the police who come and arrest the home invader… and then they arrest you for the “crime” of assaulting the man who invaded your home.

Exactly what country is this again??? 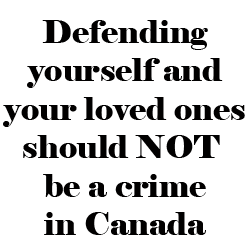 Sure doesn’t sound like Canada, does it?  At least not the Canada I want to live in.

Matt Gurney had a great writeup in the National Post where he explains quite clearly that the process is the punishment.

On Thursday, the Crown suddenly dropped the charge against Mahilal, saying that it had reviewed the evidence and there was no reasonable prospect of a conviction.That’s great news for Mahilal. But it does raise the question why he was charged at all, and why the Crown needed so long to conclude that the entire legal proceeding — including last months’ pretrial hearings — was a waste of time.

In Ontario, it is police who lay charges if they determine there’s a reasonable prospect of a conviction. The Crown takes it from there. But it’s been more than a year. Was this the first moment the Crown could find to declare that they wouldn’t pursue the case? Think of the court resources wasted, not to mention the stress on Mahilal and the Walshes, during that period. And then there’s the money Mahilal spent defending himself against a hopeless prosecution.

But Mahilal wasn’t tried. He was partially tried, and then the Crown gave up. It can only be concluded that he never should have been tried, even in part, at all.

Gurney goes on to explain how this case is pretty much the textbook definition of self-defense.

Mahilal’s case is clear cut. He found an intruder in his home at night, and defended himself with force against that intruder. His actions are clearly covered by the Criminal Code’s Section 34, which allows people to use force in self-defence if they believe they have no choice and that they are under direct threat. Finding someone in your home at night certainly fits that definition. Indeed, short of being attacked by an axe-wielding madman straight out of a Hollywood thriller, it’s hard to imagine what could fit the definition better.

Now at first glance it would appear that Crown prosecutors in this case have re-discovered their long-lost common sense and dropped all charges against Moses Mahilal.

Yeah, maybe at first glance… but upon a closer examination here is what you will find:

Crown prosecutors “reviewed the evidence” and found there was “no reasonable prospect of a conviction.“

In other words, they gave up, but not before penalizing Moses Mahilal both emotionally and financially.

The process is the punishment.

They will not admit they were wrong in bringing charges against Moses Mahilal in the first place… Not a chance.  This is merely a case of Crown prosecutors realizing their precious conviction rate was in jeopardy if they moved forward against Mahilal.

That being said, I’m delighted they dropped the charges against Moses Mahilal… regardless of their reasoning…

But wouldn’t it be nice if these boneheads could get the concept of self-defense through their thick skulls BEFORE dragging someone through the court system for no reason?

The process is the punishment.