Donald Trump is many things, and even if you dislike the man intensely (as I do) you’ve got to give him credit for putting his money where his big mouth is. 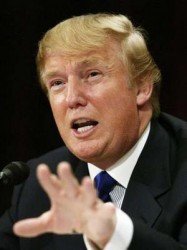 If Obama will release his college records and applications and his passport applications and records by October 31 at 5pm Eastern, Donald Trump will give $5 million to the charity or charities of Obama’s choosing.

Pick any charity in America and they will all tell you how much good can be done with $5 million, but will Obama take Trump’s money?

And that says more than anything the loud-mouthed Donald Trump can ever say… but then that was the point, right Donald?