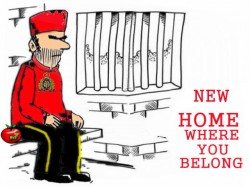 Anyone who has visited this site before will know precisely what I think of Kelowna RCMP Constable Geoff Mantler.  I think he’s a thug with a badge and a gun who should be fired from the RCMP and spend a long time rotting in a jail cell.

Geoff Mantler will now stand trial in Kelowna, BC, on November 26, 2012 for the brutal kick to the face of Buddy Tavares after Tavares was already on the ground and obeying Mantler’s orders.  The trial is scheduled to last two weeks.

Mantler managed to skate on charges of police brutality earlier this year in another case where even the judge believed Mantler was guilty, but I’m hoping that this time will be different.  This time there is video evidence of Mantler’s disgusting and reprehensible actions.

This trial follows in the wake of another high-profile RCMP disgrace, Monty Robinson.  Until the sentencing came down in that case I actually thought there might be some measure of justice here in British Columbia, but that was not to be.

Despite scathing remarks about Robinson’s disgusting behaviour throughout the investigation, B.C. Supreme Court Judge Janice Dillon inexplicably felt 30 days of house arrest was a suitably harsh punishment for killing Orion Hutchinson and then lying about it.

Should Geoff Mantler receive a similar slap on the wrist if convicted or worse, get off completely, then I don’t hold out much hope for the RCMP ever regaining their shine here in BC.  Too many cases of bad cops being pampered and protected have left a very bad taste in the mouths of too many British Columbians.

Here are some of the columns I’ve penned about this case in the past, in case you’d like to catch up on the case: