Can you imagine seeing that headline if it were actually true?

Never in a million years.

No, if anyone were publicly threatening the life of the Pretender-In-Chief, their “Anointed One“, they’d be screaming about it from the rooftops. It would make front page headlines in every major newspaper in the nation instantly.

But since it was just Governor Romney who was threatened hundreds of times, both during and after the Presidential Debate, well…

Can you imagine if Twitter lit up with death threats against The Anointed One like it did against Governor Romney?  The Lamestream Media would search to the ends of the earth to find the culprits.  However when it’s Governor Romney being threatened it’s just

[Yawn] “Move along now… Nothing to see here folks.”

That’s the overwhelming sentiment of the Lamestream Media.

Threats against Governor Romney is no story at all since they would rather see him dead than win the election.

That ridiculous sentiment is all that’s left of the carcass of Journalistic Integrity in America today, as evidenced by the antics of the [alleged] debate moderator Candy Crowley.

It is important to stress that these Twitter accounts are genuine, they are not fakes. Many of them have thousands of previous tweets.  The following Tweets are just some of the ones compiled by Twitchy.com both during and after the debate;

“If Romney win this election, he might as well wear a shirt that says “Assassinate Me Bitch”.

“Somebody needs to asassinate This mofo Romney.”

“Romney make me wanna hop through the tv & just assasinate his ass.”

“I aint gone lie… Food stamps the shit! I mite assasinate romney my damn self if he get elected!”

“If romney get elected i hope a nigga assasinate his bitchass.

“No birth control???? Lol rlly Romney the american population is going to overflow and then we’ll have to resort to murder and you’ll be #1.”

“At this point in time I am completely prepared to MURDER ROMNEY MYSELF!”

“If Mitt Romney wins, which I doubt, someone should assassinate him before he ruins the lives of our generation & our children.”

“IF ROMNEY GETS ELECTED AND TAKES AWAY MY FOOD STAMPS IMA SEND SOMEONE TO MURDER HIS ASS.”

It is important to emphasize that these are just a selection of scores and scores of threats to assassinate Romney that have exploded on Twitter over the last 12 hours. We didn’t even have time to check Facebook or any other social networks.

Here’s a short sampling of the remarks on Twitter.  You can find lots more on Twitchy.com, who compiled a bunch of them. 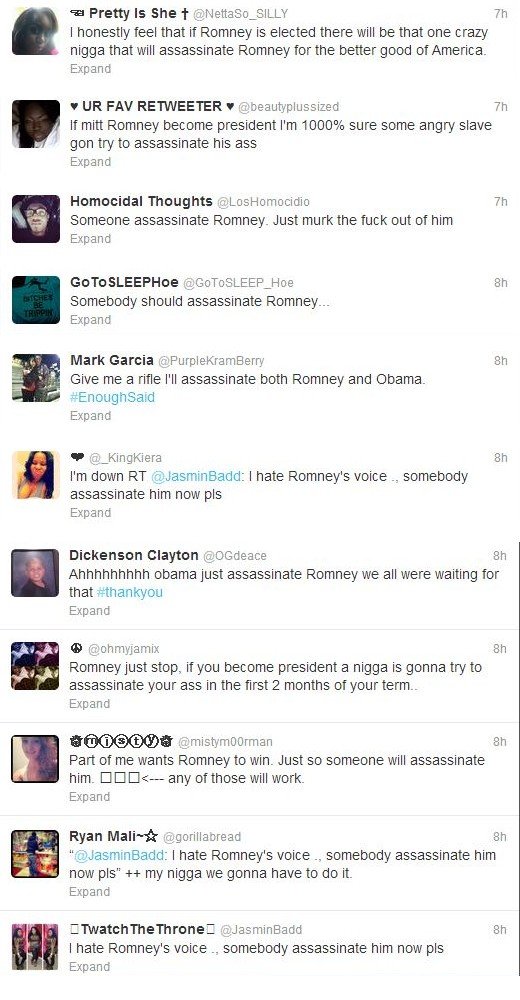