Has the world suddenly gone bonkers?

The world seemingly has been afflicted with mass insanity since time immemorial.

Hi-tech toys merely allow the madness to be refined.

Eavesdropping on every telephone conversation, snooping into every e-mail message, cameras and recorders spying on and listening to citizens on every street corner, super-snoop data-mining centers sucking up and storing our every word, thought, move, including bank statements, till receipts and credit and debit card transactions.

All are methods for identifying and disappearing “terrorists”.

But, of course, you aren’t a terrorist…as long as you can “prove it”, which you can’t. 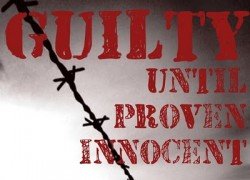 This is called “reverse onus”.

“Presumed innocence until proven guilty” under the Charter of Rights and Freedoms is passé. Whereas the upside down “reverse onus” supposedly means “guilty until proven innocent” in governmentese, it actually means “GUILTY until proven GUILTY” because gun owners and terrorists, of which you are tagged one or the other, are not going to be found “innocent”.

The lunacy knows no boundaries.

Unidentified squealers are protected while the unknowing victim of the allegation is subjected to search, seizure and deprivation of liberty, all the while never able to know the identity of his accuser, let alone confront them in a court of law.

This civil-persecution system that views the accuser as always truthful and the accused as always guilty harkens back to “witch-hunting”.

The first mass witchcraft trials reached fever pitch sometime in the 15th century and crescendoed to mass hysteria between 1550-1650.

Nobody should be horrified that the “witch-hunters” have everybody under suspicion and surveillance in Canada today. The United States created mass hysteria searching for A Red Under Every Bed in the 1940-50s. These tactics also were used during the Nazi Germany and Stalinist eras of the 1930-40s.

Witchcraft trials were an on-again, off-again fad for nearly three centuries before witch burnings finally faded out of favour.

Then, just as today, public health and public safety issues played an integral role in the witch-hunts.

In the wake of the bubonic plague of 1347-49, which medieval Italian writer Giovanni Boccaccio described as so rapid and devastating that the victims often “ate lunch with their friends and dinner with their ancestors in paradise”, rumours were rampant and fingers pointed accusingly at plague-spreading witches.

Forget about the disease-spreading rats and fleas. That would be too logical.

In Nazi Germany, Fuehrer Adolf Hitler convinced his stable of legalized murderers that vermin-carrying Jews were a threat to public health and had to be exterminated.

Today, terrorism is the latest fad setting off mass hysteria, and is used once again as an excuse for government to erode citizens’ rights. They do so under the same shop-worn mantra of “public safety” and “national security”.

Sadly, people must be individually scorched by these Draconian laws before they will open their eyes and minds and stand against them.

The very notion of “justice” has been turned on its head. Only a government that fears its people would stoop to implementing programs that protect the identity of the accuser and leave the accused defenseless.

Nobody outside the firearms community paid heed to the gun owners rattling their sabers over a criminal law that blatantly violates Constitutional rights and freedoms no less than 28 times.

And, now, the unlawful provisions prescribed in that trailblazing piece of Liberal Party trash called the Canadian Firearms Act have finally caught up with the rabid non-gun owners alike. Hope you like all the strip searches on the lawns in broad daylight and surprise police raids into your homes without a search warrant while they “come in to look around and take what they want”.

Under a law only a dictator could love, firearms owners can be sent to a federal penitentiary for merely failing to report their address change. Yet countless violent offenders, child molesters and rapists roam the country, free from such “violations” of their civil liberties and whose names never get into the data banks.

They are called “informers” who are motivated by payoffs and perks to give information; it doesn’t matter if the information is correct before the police leap.

Hundreds of firearms owners have had their homes and businesses ransacked without due cause since the Liberals’ Bill C-68 came into effect in 1995. Many others have been thrown into jail cells without provocation. The police use their powers to force the prisoners to give up their guns without having to go to the trouble to apply for a search warrant.

Drivers don’t go to jail when caught operating a vehicle with licenses, registration or insurance cards that are expired or suspended, although there are fines, points and community services imposed. Why were gun owners demonized so harshly as second-class resident paper criminals (they don’t even rank as citizens)?

It wasn’t until the anti-terrorism legislation (Bill C-36) was rushed into law in late December, 2001–less than four months after the 9/11 attack on America which indicates it was waiting in the wings–that well-known Toronto lawyer Clayton Ruby felt the pinch over the exact things that firearms owners had decried for years and he rebuffed.

Thinking along Liberal lines, his theory was that only police and the military needed guns.

Yet in a by-lined Globe and Mail article of December 11, 2001, Ruby expressed fears that the threat of terrorism was impelling Canadians to give up or distort their fundamental rights and democratic freedoms.

“It is the role of lawyers in a free society to defend the rights of the oppressed, and not to be conscripted by government to secretly inform on their clients,” he contended. “The chilling effect of these provisions may make it impossible for individuals or organizations targeted by the government to obtain any access to justice at all.”

It was on January 21, 2004 that Ottawa Citizen journalist Julie O’Neill personally felt the electric jolt from the same long arm of the law. She came to the stark realization that the future of her profession–and freedom of the press–was under attack.

On March 20, she told the University of King’s College School of Journalism in Halifax, Nova Scotia, she no longer took her freedoms for granted.

She, of all people, never should have taken her freedoms for granted in the first place. One must always be vigilant for lurking dangers.

On that fateful January day, O’Neill could have commiserated with gun owners’ plight. Her private life was shattered. Her sense of her home as a private sanctuary evaporated. She no longer assumes–and never should have assumed–that her telephone conversations and e-mail correspondence were private nor that her computer files belonged to her.

Every nook and cranny of her “castle” was searched. She was now living in a glass house. Not even her lingerie drawer escaped the indignities. Her garbage was whisked away by one of the 20 armed RCMP officers from the Orwellian 1984 Truth Verification squad who flooded her house, guarded her premises and simultaneously raided her newspaper office. (Suggested reading of this spooky matter is the detailed article The Wrong Arm of the Law, Ryerson Review of Journalism, summer 2005, http://www.rrj.ca/m3509/)

What had O’Neill done to invite and deserve such oppressive state-perpetrated tactics? After all, this is supposed to be Canada.

She had written a newspaper article.

O’Neill was incredulous when she discovered writing for a public journal can be hazardous to your health; it is punishable for up to 14 years in prison.

The police raided her home and office in search of her source of information and a document cited by her in an Ottawa Citizen article of November 8, 2003.

Her story focused on Maher Arar, the Syrian-born Canadian computing engineer. She related he was deemed an al-Qaeda terrorist by U.S. authorities. Arar was detained in New York and taken to Syria. When returned to Canada in October, 2003, a year later, he told tales of imprisonment and torture.

O’Neill’s story told how he came to the attention of anti-terrorist investigators in Canada and of a series of security leaks that linked him to terrorism.

I don’t know where this woman of the mass media press had been. But when she returned to the real world, hopefully she was less naive. This is Kanuckistan after all, the True North Proud and Gagged by such freedom-sucking legislation as C-68 (the Firearms Act), C-36 (Anti-Terrorism), and, at the relevant time, the new Elections Act.

I had long begged people of O’Neill’s ilk and prestige to keep vigilance on Yukonslavia as the Petri-dish of what was happening to Canada, but they obviously can’t be bothered with such trivial matters…not until their ox is gored.

Now my invitation doesn’t matter because these atrocities have gone on a global scale, thanks to the New York City-based United Nations that is leading the charge to a One-World Order totalitarian society in which individualism is taboo; the masses will dress, eat and think alike, live in identical stack’em-pack’em units and be allowed to own only bare, government-issued necessities to exist.

Interestingly, O’Neill was caught under the Security of Information Act portion of the anti-terrorism legislation which seemed redundant, anyway. O’Neill noted that s. 4 reads exactly the same as the dusty old Official Secrets Act of 1939, which she didn’t believe was intended to prevent journalists from doing their job.

I wouldn’t bet on that, although the accepted purpose was for Canadians to catch German spies and Communist infiltrators like their American counterparts were doing at the relevant time.

In 1949-50, the Alger Hiss-Whittaker Chambers spy case was underway before the House Un-American Activities Committee. Hiss, a Harvard-trained lawyer, was a high-ranking employee in the State Department who denied any espionage involvement with Communists. Chambers, a self-confessed Communist, accused Hiss of espionage.

The state is always able to find SOMETHING the sinner can be convicted of, no matter how self-serving.

The conviction offered little-known Senator Joe McCarthy of Wisconsin a golden opportunity to make political hay. He railed that the State Department was infested with Communists.

Then came the mass hysteria.

The Federal Bureau of Investigation had been stalking those considered disloyal since 1947. The agency conducted a check of two million names on the federal payrolls and the 500,000 who annually applied for U.S. government jobs.

Any dirt–regardless how minor–would bring on a full investigation into a person’s past. No proof of subversive activities was necessary for dismissal.

Often, civil servants were fired without knowing why and not knowing who had accused them of having ties with the Communist Party. Since the accused didn’t know who they were fighting, they were defenseless.

Once the wrongdoer was pinpointed and neighbours interrogated, the victim and his family were automatically and immediately ostracized from society. So-called friends and neighbours were afraid to associate with someone accused of Communist activities.

Movie extras, film stars, entertainers–even kindergarten teachers–were blacklisted from working in their respective occupations. Successful one minute, they were out in the streets penniless the next.

Justice under the vigilantes was kangaroo-court style. The deck was forever stacked against the accused, despite investigators lacking any knowledge at all about the informer’s background or motives. And they didn’t care.

It was akin to the Puritans’ Salem witch trials of 1692, and just as bad, if not worse, then what has happening in Soviet Russia under Communism, and what Canada has adopted today.

Sometime back in the late 15th century Europe, Christian church clergymen had been directed that when sorcery with the Devil was charged by someone, but went unproven, the consequences would be suffered by the accuser–NOT the accused.

It did wonders for minimizing false accusations against the innocents and certainly cut down considerably on expensive public-funded trials.