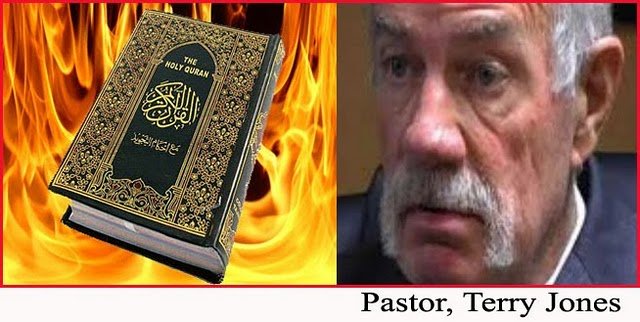 Florida Pastor Terry Jones is best known for his outspoken opposition to islam.  He made international headlines when he burned a Koran two years ago on the anniversary of 9/11.   He also created and promoted “International Burn a Koran Day” as a way of protesting against radical islam.

Terry Jones was scheduled to debate Toronto imam on the film Innocence of Muslims outside Ontario’s legislature Thursday evening, but instead spent over 4 hours being searched and interrogated by Canadian Border Services Agency (CBSA) agents before being denied entry into the country.

Eventually both Terry Jones and his assistant, Wayne Sapp, were handed letters from CBSA explaining they would not be allowed into Canada.

“Dr. Jones’ letter said they were denying him entry to Canada because years ago in Germany, when he lived there, he was fined by the German government for using the title doctor,” said Fran Ingram of Stand Up America Now, the U.S. organization that promotes Mr. Jones.

The CBSA letter also demanded that Mr. Jones provide a criminal records check before attempting to  enter into Canada again.

While the CBSA is arguing they had valid reasons for keeping Pastor Jones out of Canada it just doesn’t pass the smell test.

CBSA cited a note from German officials who were upset that Jones used the designation “Dr.” from an institution they refused to recognize and a claim that they didn’t have enough information about an alleged breach of peace bond against Mr. Sapp as the reasons why they were not allowing the two into Canada.

Yeah, okay.  That’s sketchy at best, and disingenuous to say the very least.

For reasons unknown, the Canadian government was not interested in allowing a Christian Pastor to debate a muslim imam in Ontario.

Odd, since they were perfectly willing to allow radical muslim Dr. Bilal Philps to speak at an islamic conference in Calgary earlier this year. Philips has been kicked out of two countries (Germany & Kenya) and banned from two others (Britain & Australia) for his outspoken views on homosexuality, among other things.

But since Philips was born in Canada it’s completely okay for him to speak, right?  But an American Christian pastor? Forget about it.

1) a Christian, and
2) burned a Koran and posted the video on YouTube.

It would seem that Freedom of Speech is based, not on our Charter of Rights and Freedoms, but on which religion you happen to preach.

How very open-minded of the Canadian government…