This video clip is of an anti-American demonstration in Toronto, Ontario, Canada where Muslims marched on the American Embassy.  Look for the two enormous lies that the Tonto imam peddles in the hopes that nobody will notice.

In case you missed them…

1. “Free speech does not give you a right to go and attack somebody’s faith.”

2. “If anyone would be attacking the Christian faith or the Jewish Faith Muslims would be hand and hand with them.”

Its rather amazing what will draw a muslim or a herd of muslims out of the woodwork isn’t it? Not human rights, not the mass extermination of Jews, not the murder or disfiguring of little girls……. but the bruised sensibilities of thin-skinned, child molesting, homicidal, fanatical imams and mullahs will move mountains won’t they???? 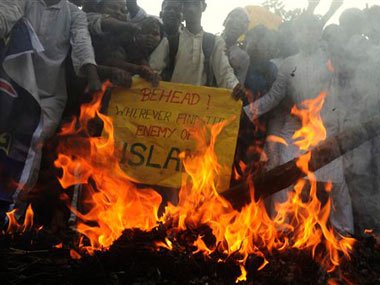 The rabid edicts of puffed up, mutton molesting, bearded islamic blowhards and windbags will bring them out in droves………… go figure!!!!

Where were these self righteously indignant people during the trial of the Toronto 18?

Where were these people during the trial of Mohammad Shafia?

Where were these people when the islamic misunderstander Mouna Diab was arrested in Montreal?

Where were these people when arrest warrants were put out for the Al-Shabab supporters in Winnipeg?

Where were these people when a muslim madman (excuse the redundancy) entered a ready-room in Ft Hood screaming Allah Ackbar-God is Great!!! and murdered 13 people in cold blood including an unborn child?

Where were these people when a terrified woman, the sexual plaything of two Taliban men, was knelt down and then, after a terrifying display of poor marksmanship, had her skull blown open by a few rounds from a Kalashnikov?

Where were these people when little Neha Munir, a 5 year old Pakistani girl who suffered the love of allah and was repeatedly raped to the point of near death?

Where were these people when countless women and girls suffer the love of their muslim husbands and in-laws and have acid thrown in their faces for the unspeakable crime of wanting an education?

Where were these people when the last ragged gasps of a self-immolated woman bid her farewell from a lifetime of being beaten senseless in accordance with her muslim husband’s bruised ego and the edicts of the lunatic muhammad?

Where were these people in the hours, days, week and months that followed the World Trade Center bombings (both of them)?

Where were these people during the trial of that muslim sophisticate who murdered his daughter Aqsa Parvez??

They were….. where all muslims are found when the truth of islam needs to be confronted………. hiding under the rock of hypocrisy…… their home away from home.

The reality, and I am so very glad these people came out to march, is that muslims, the catatonic devotees of the cancerous ideology of islam, are a sneering, hostile, treacherous, ungrateful, murderous, treasonous, threatening, deceitful, backward, barbarous, savage and duplicitous mass of humanity that is completely incompatible with Western culture and society and all of our values.

They worship a vulgar little reptile of a man, muhammad, a little worm who wandered the shifting desert sands spewing his poisonous ravings into any ear that would listen and cutting off the heads of those who knew him for the fraud he was and refused to listen.

These meek, mild, humble, pious, peace loving muslims (please excuse my dementia), they worship the 7th century equivalent of one of the many “Shopping Cart Prophet’s” you see wandering the streets of our cities…. unwashed, unshaven, pathetic and lost, stumbling about giving hot-winded and blustering sermons to lampposts and parking meters and begging spare change from passersby…… and that, in reality and in truth, is all muhammad was…… a psychopathic serial killer whose ego and dementia found him pulling cutesy little messages out of his arse and presenting them to the unwashed hordes as “THE VOICE OF ALLAH!!!”

A low class, failed arab gigolo, who heard the voice of allah coming from everything from piles of steaming excrement to the melodic, putrid flatulence drifting out of a pig’s ass…….. oh, were it not so tragic and obscene it would be outrageously funny…… sorry….. correction…. it is tragically obscene and outrageously funny!!!!

These muslims, here in Canada and around the civilized world, come as hyena’s in sheep’s clothing, wrapped in the robes of religious propriety and shrieking, screaming, whimpering, whining, rioting and demanding all of the protections of a bona fide religion….yet islam is not a religion but quite simply a political ideology whose stated goal is the domination of all humanity and the conversion of all non-believers. And those who refuse conversion?, well, they will be either enslaved and or executed…plain and simple…….and the Jews….well, the Jews will, every single last one of them…..be put to the muslim knife.

These muslims in Toronto and their ilk across Canada, are a clear and present threat to the national security of Canada and should be treated as such. The troubling facet of this is that it truly is the tip of the islamic iceberg in Canada……

If these people numbered in the one or two thousand at the demonstration, you can rest assured that there are 50,000 to 150,000 muslims in the Toronto area who stayed home that day but who were, are and always will be, in complete support and sympathy with political sentiments displayed here.

This is the best argument for the deportation of muslims and the termination of immigration from every one of the 57 countries that make up the Organization for Islamic Cooperation.

Now, thanks to the video above, I have what I need to show Canadians and muslim apologists the true face and nature of islam and muslims in Canada. This is proof positive that the ‘GOOD MUSLIM” does not exist, never has, does not now and never will. The “Good Muslim” is a myth designed to dissuade and distract……a bold and poisonous lie.

The reality is that the presence of muslims in Canada is clearly a threat to the lives and safety of non-muslim Canadians, this is a fact that should be recognized and acted upon by our law enforcement agencies, our security and intelligence infrastructure, all levels of government and our judiciary.

As the weeks and months draw on I can see no good coming of our relationship with muslims, they push and prod and provoke. They are, in every way, all Oriana Fallaci said they were.

They are the ones who are itching for a showdown and I, for one, say we should give it to them.

Sooner or later this will end in blood, they know it and we know it…….. and when the backlash against the muslims gets started it will be breathtaking.

Unfortunately we are receiving little backing from our government and as such there will rise a wave of vigilantism to provide a response to the shrieks, demands and hostility of our little islamic friends….. and if so…. so be it say I…….. for I am amongst millions of Canadians who have grown tired of our muslim guests and their injurious ingratitude and insipid whining………. the party is over……… let’s turn out the lights, pack them a bag lunch for their trip home to the Islamic shithole of their choice and show our muslim friends to the door.

The sooner the better.