Jim Chiodo, President of the Ottawa County Patriots contacted me after he discovered my Sept. 23rd article on the fantastic work his organization is doing.  They’ve launched a billboard campaign to show the American public the difference between a proven failure (Obama) and a proven winner (Romney).

Thanks so much for posting a picture and “stuff” about our semi truck billboard. We have three more in the works (attached). Thanks for making us famous on your blog!

As I wrote to Jim, I haven’t done anything but bring some must-deserved attention to the great work he’s doing. He’s the one that deserves all the credit, not me. He’s the one creating and distributing all these great billboards. All I’m doing is writing about them!

You can see their first billboard in my earlier article, “Ottawa County Patriots create awesome US Presidential Election billboards.”

Here are the images of the latest billboards they have created. 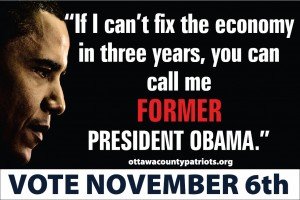 Not only did Obama NOT fix the economy in three years, he did the exact opposite.  He sent the US economy so far into the sewer it may never fully recover.

Since he failed to do what he promised, hold him to his own words.  Send him packing this November 6th. 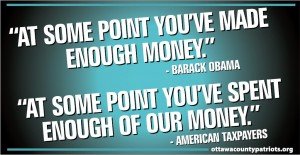 Obama hates the capitalist system that makes it possible for him to send American Taxpayer Dollars to fund terrorists and murderers in Libya.  You’d think he’d express a little gratitude to the people who actually pay for all his mistakes. 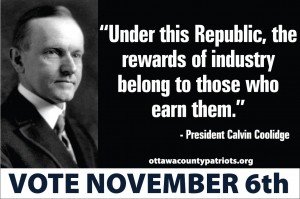 Clearly President Calvin Coolidge never got the memo from socialists like the Coward In Chief currently occupying the White House.

He believes, bizarrely, that government is the only reason businesses can operate.

America, please do the right thing this November 6th and send Obama packing!