The claim goes like this.  Our Freedom of Speech must be denied because of those who speak ill of Islam so enrages muslims that they cannot prevent themselves from becoming homicidal lunatics.  It’s not their fault… you mocked Muhammad and therefore are to blame for any violence that muslims commit.

Hogwash like this makes about as much sense as anything else coming out of the mouths of those followers of “The Religion of Peace” who lovingly desire to kill anyone who doesn’t believe what they do. 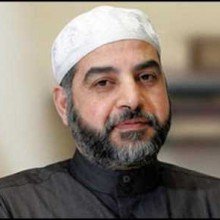 This latest nonsense is from the imam (read muslim extremist) of a large New Jersey mosque, Mohammed Qatanani, who is demanding that the First Amendment of the US Constitution be “disregarded” and replaced instead with Sharia Law.

“We, as Americans, have to put limits and borders [on] freedom of speech,” Qatanani, leader of the Islamic Center of Passaic County (ICPC), told TheBlaze. He explained that while Americans may “have the freedom” to speak their mind, ultimately, they “have no right to [talk about Muslim] holy issues” as it will incite “hatred or war among people.”

Bluntly put, Mohammed Qatanani can get stuffed.  So can everyone else who believes that we should surrender our rights in the face of muslim terrorism, which includes the White House Coward In Chief Barack Obama.

In fact, so grave is mockery of the prophet considered, that the cleric – Mohammad Qatanani, who leads one of the largest mosques in New Jersey – even believes free speech that criticizes Islam poses a national security threat to the U.S. and that those responsible should be investigated by the Department of Homeland Security. 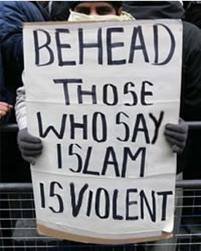 Last I checked it wasn’t followers of Judaism or Christianity that flew planes into buildings in New York, but anyone who dares name the religion of those who did should be investigated?  This imam is a buffoon and should be, along with his beloved prophet, laughed and ridiculed off the planet.

If this proponent of the muslim lunatic fringe wants to live under Sharia Law then he is free to move to a country that supports that madness.

Neither Sharia Law nor morons like Mohammed Qatanani have any place in America (or Canada either, for that matter).

I am sick and tired of the argument that muslims are so lacking in self-control that they cannot possibly help themselves from becoming homicidal maniacs when someone insults their religion.

Tiffany Gabbay, in her article on TheBlaze.com wrote:

Qatanani said he thinks agitators who slander Islam, or, more specifically, the Prophet Muhammad, incite violence and hence, pose a national security risk that threatens the safety of Americans at home and abroad. Thus, America should disregard its First Amendment as it is typically applied and instead act in accordance with sharia law for the ultimate “good” of society.

Qatanani is an idiot, pure and simple.  If he or any of his muslim brethren dislike the American Constitution and its First Amendment protections of Freedom of Speech he and they are welcome to leave America and go to any of the many countries who despise freedom.

He has no place in a nation where Constitutionally-protected Rights and Freedoms actually exist.

Morally bankrupt individuals like Qatanani find nothing wrong with beheading someone who says something against their beloved child-molesting prophet, yet saying anything they like about Christians, Jews or any other religion is perfectly fine.

Hypocrites, every one of them.

Tim Brown of Freedom Outpost got it 100% correct when he wrote:

If Muslims don’t have a thick enough skin to deal with mockery or criticism without resulting to violence, or as the Imam said, becoming “a national security threat” then perhaps they should find another place to live, such as the area where they might feel at home with burning things and blowing up thing and killing others.

Amen, Tim Brown.  Amen.
In closing, I would urge you to read the complete article by Tiffany Gabbay on TheBlaze.com as it contains a very thorough background on Mohammed Qatanani, his links to Hamas, his near deportation from the United States in 2008, along with more juicy quotes like:

At one point Qatanani said that it is essentially fine to mock Jesus or Moses (as Americans often satire various religious figures) but that is absolutely verboten to mock Muhammad.

Mohammed Qatanani is a religious fanatic and a hypocrite of the highest order.