The great failed experiment called the United Nations has come up with another bizarre notion.

This time it’s the outlawing of speech.

I don’t know if the Marxist deadheads hanging out in the tombstone-shaped, 37-floor UN building in Manhattan intend to prohibit all speech to bring complete silence to the land or just continue their rout of demonizing and redefining select, politically-incorrect English words like the Durham District School Board in Ontario did, as was recently brought to our attention by Christopher di Armani.

Or perhaps these self-avowed UN brain boxes overshot their intellectual capacities in an attempt to continue the development of Dr. Ludwik Lejzer Zamenhof’s fabricated, international language known as Esperanto.

The Polish oculist and linguist’s noble idea was that a bland, uninteresting, artificial form of Newspeak would be an easy-to-learn, politically-neutral communication method capable of transcending nationalities while fostering international peace among races speaking a multitude of languages.

Personally, I don’t care what these bonehead, skin-discoloured alien illiterates do who speak the politically-incorrect English as a Second Language (ESL).

I grew up in a household where the motto was:

In other words, be truthful. Don’t be skirting the obvious by trying to wallpaper over negatives with positives.

I remember neighbour ladies avoiding uncomfortable words, whispering euphemisms like “the poor old dear has expired.” Having “expired” sounded deliciously naughty and unfit for children’s ears, so I naturally wanted to hear more.

When my mother cut through the fog that had obscured my comprehension, I protested.

“If the lady died, why in thunder didn’t somebody simply say so?”

It’s an age-old problem. Preference leans toward lying to cover up ugly truths with snaky words or otherwise using vocabulary as a powerful people-control tool.

Etymologists, linguists, journalists, lexicographers, scholars and others dependent on the universal English language expect meanings of words to be grounded firmly, changing only through a natural progression of usage without any forced manipulation from government or anybody else for political purposes.

However, newspaperman H.L. Mencken (1880 to 1956) recognized that words, like the ideas they represent, become formalized, fossilized, and emptied of intelligible significance.

Thinking tends to become cant and all language a sort of meaningless slang–a mere exchange of what the philologists call counterwords, i.e., worn-out rubber stamps. In this way, the concept of “aristocrat” has become almost indistinguishable from a “loafer”, he wrote.

Newspeak was devised as the official language to meet the ideological needs of Ingsoc, an acronym for “English Socialism”.

The constantly-changing language necessitated many revisions to the Newspeak Dictionary, comparable to a Harper Dictionary of Contemporary Usage.

For example, Newspeak retained the word “free” but only to describe a “field free of weeds”. The old sense of “politically or intellectually free” had been eradicated because political and intellectual freedom no longer existed as concepts.

Inventing new definitions is the most effective device for government to minimize the possibility of subversive thought, agreed Brad Edmonds.

In his 2002 Internet piece What You Should REALLY Fear, the-then online columnist and Alabama banker pointed out that the government has invented new definitions of words to the extent that anyone–with the possible exception of submissive, freedom-hating couch potatoes–can be accused of domestic terrorism and taken away at gunpoint.

Mr. Edmonds’ sage suggestion was to examine a new piece of legislation by concentrating primarily on the new definitions.

Robertson Cochrane, former Globe and Mail “Word Play” columnist whose best musings on the meaning of everyday English were bound into The Way We Word (Fifth House Publishers, Saskatoon, 195 pp, 1993) confirmed that perversion of language for personal and political purposes is nothing new.

“Despots of every stripe, zealots of every ‘ology’ and ‘ism’ in every generation from the beginning of time, all the windbags, bullies, satraps (tyrants), snake-oil salesmen, propagandists, and proselytizers (converts) in history–even some earnest altruists–have tried to capture hearts and minds by first manipulating words.”

Are you listening to Mr. Cochrane. The self-described verbomaniac, he said, saw no difference between a shooting war and a struggle for intellectual dominion.

“…the first order of business is to round up time-honoured words, strip them of integrity, dress them in uniforms of deceit, and send them on carpet-bombing missions in support of some meretricious objective or other.”

George Orwell, a master of this technique, oxymoronically contrasted opposites to give double-barrelled meanings to ideas.

Famous Big Brother slogans were: “War is Peace”; Ignorance is Strength” “Freedom is Slavery” and “Love is Hate”. 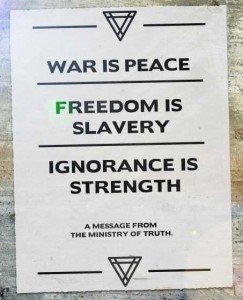 The Politically-Correct Thought Police have been busy for years in traditional Orwellian fashion, leaving us almost no words to express outrage and indignation over the junking of our English language.

Then, in 2001, American author Ken Smith came across as a bit “cranky” when he published Junk English, a book National Post columnist Robert Fulford heralded as a vigorous argument against shifty, pretentious and misleading language.

Mr. Smith defined junk english as a fog around the truth. “It is something innocent, sometimes lazy, sometimes well-intended, but most often it is a trick we play on ourselves.”

We are our language and maybe Mr. Smith could have taken the statement one step further. Maybe we are guilty of allowing the trick to be played on us by not speaking up against outside forces who are rearranging our language.

“His book,” added Mr. Fulford in his January 12, 2002 column, “won’t likely be admired in the Alberta educational bureaucracy. The Alberta Department of Learning doesn’t yet know that dreaming up silly new terminology makes a public official look clownish rather than creative.

“…in a report called Removing Barriers to High School Completion, Alberta loosed upon the world a new euphemism. High-school dropouts have said in focus groups that they don’t like to be called dropouts. The report agrees. It says that term victimizes them by weakening their self-esteem. So the bureaucrats have decided to relabel those who never finished high school as ‘early school leavers’.”

Mr. Fulford, a self-professed Grade 11 member of the “early-school-leaving community”, said he appreciated the Alberta government’s attempt to bring some dignity into “victims’” wretched lives.

“(B)ut I for one am sticking with ‘dropout’ “, he wrote. “It’s shorter, more direct, and more graphic. Of course, it’s probably also a euphemism. At some point it must have seemed a kinder way of saying ‘failed’.”

People may tiptoe around whatever makes them uncomfortable (expired vs died) by using weasel words. But UN-sponsored environmentalists have demanded that animal insults be black-listed, too.

It hurts their delicate green sensitivities to place negative values on natural things. “Snake in the grass” and “piggin’ out” are “out”. “Animal companions” for domestic pets is “in”.

Expressions like “virgin land” and “Mother Nature” are taboo in the eyes of feminists and greens. A report, released about a 2001 meeting in New York City for the UN Special Session on Children, said the anti-Marxist word “family” did not meet standards of acceptability.

Delegates were told the term “family” was inflammatory and very upsetting to other comrades, a message straight from Aldous Huxley’s 1932 Brave New World.

As wordsmith Robertson Cochrane observed: “In the welter of language revisionism being generated by those in the vanguard of opposition of such things as sexism, racism, ableism, ageism, speciesism (discriminating against nonhuman animals) and–a new one to me–resourceism (abusing nature), it’s impossible for a sensitive, sensible, average person to keep track of which terminology is ‘in’ and which is ‘out’.”

Amen to bruthuh Cochrane, a protector of the English language, who noted that ideological combat can be devilish, especially when innocent words are caught in the crossfire.

Oh, wouldn’t it be “loverly” if some of the above-mentioned word gurus would take a crack at the subject of some of the Liberal Party’s devilish tampering with English language definitions that hit close to home?

The Liberals neglected to define the word “store” in the Canadian Firearms Act and the Criminal Code of Canada. To correct the parliamentary goofs’ goof-ups, the so-called Justice department forced a respected Whitehorse resident to the Supreme Court of Canada on April 17, 2002.

The black-suited lawyers in the lower court and black-robed lawyers in the appeal courts engaged in eloquent university-style philosophical and etymological combat at the emotional and financial expense (about $100,000) of Allen Carlos. (Justice Served Up Yukonslavia Style: The Shameful Conspiracy Behind the Allen Carlos Trilogy, 750 pp, pdf, CD, 2003, 2009.)

A territorial court judge acquitted the defendant of all firearms storage infractions in the lower court and two justices acquitted him in the Yukon appeals court.

A single dissenting appeals vote gave right-of-appeal to the highest court where the Crown argued that the majority of judges erred in their interpretations of what Parliament “really intended” for the word “store” to mean when the law was enacted in 1995.

Hey, all you assorted incompetents and goofs, aren’t you smart enough to adhere to the age-old maxim I learned as a child:

When nine Supreme Court justices ruled on this case, every gun owner in Canada, and other individual property owners, were profoundly implicated.

Plus, another perfectly good English word was discarded as so much junk and substituted with an off-the-wall definition contrary to what people learned to believe as fact by relying on time-honoured lexicons.

If the government is going to drive ordinary, responsible gun-owning citizens into the Supreme Court of Canada one by one and convict them for a law that does not exist before the judges have succeeded in defining and redefining every blasted word that is enshrined in statutory legislation, then Parliament is a proven useless institution that can’t get it right.

But Brad Edmonds was right.

The devil is in the definition. Therefore, every new piece of legislation has to be examined carefully, concentrating primarily on new definitions.

And it is easy to predict that law libraries across this country will replace every venerable, multi-volume Oxford English Dictionary  with the newest Harper Dictionary of Contemporary Usage  and a copy of Ken Smith’s Junk English.