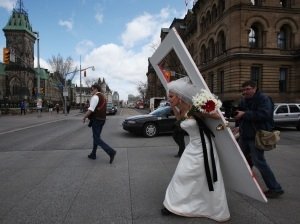 Yes, the photo looks a little weird, until you understand why this woman is wearing a wedding dress and carrying a full-size door, white on one side and red on the other, with the words “Mr. Immigration Minister, it’s getting heavy” emblazoned on the back of it.

To quote the Ottawa Life magazine story about her plight (which I encourage you to read in its entirety):

The story begins in 2004, when Ottawa dance artist Lainie Towell traveled to Guinea West Africa and fell in love twice. First with the country’s dance, and then with a Guinean drummer named Fodé Mohamed “Akra” Soumah.

After several trips to Conakry, a few bouts of malaria, countless hours apprenticing in an African ballet, and some visits to a witch doctor, Towell and Akra got married. She then sponsored him to come to Canada.

Twenty-nine days after he arrived in Canada, Akra disappeared. It seemed he had gotten what he wanted from the marriage – his Canadian permanent residency status.

Refusing to remain a victim, Towell took matters into her own hands. She launched what would become an international media campaign and exposed her broken heart – along with Canada’s lax immigration laws – to the public. When a Canadian Border Services Agency enforcement officer saw her story in the news and launched an investigation, Towell discovered first-hand that one woman’s courage and tenacity can help change the system. 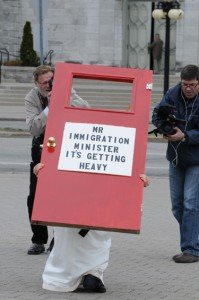 Lainie Towell is a very courageous woman, from what I can tell.

She has single-handedly put the issue of immigration fraud onto the national and international stage with her very visual one-woman protest march on Canada’s Parliament Hill.

The decision from the Immigration folks that removed this “man” from Canadian soil is available at http://www.howtocatchanafricanchicken.com/pub/media/file/Appeal%20PDF%20Decision.pdf

Lainie never knew about the child from a previous relationship when she married Soumah.  He never disclosed this to her.  Nice guy…

[4] The appellant testified on appeal and challenged the validity of the exclusion order.  The appellant also claimed that special relief should be granted because of sufficient humanitarian and compassionate considerations, in light of all the circumstances of the case and taking into account the best interest of the child directly affected by the decision.

If Fodé Mohamed “Akra” Soumah was so terribly concerned about the best interests of this child, then why did he hide the child’s existence from his then-wife, Lainie Towell?  It would appear the child’s best interests only became a concern of his when it directly affected the possibility of his remaining in Canada.

Not exactly a stellar endorsement for his claim of concern for the best interests of the child he wouldn’t even admit existed.

[6] The panel finds that, even in the absence of the testimony of Mme Towell, the documentary evidence was sufficient to establish that the appellant was the father of a child that he never declared and that he was aware of the existence of the child prior to or at the time of his landing.

[16] The panel considers that the nature of the misrepresentation is very serious and strikes a blow at the very integrity of the immigration system.  The appellant chose to mislead Canadian officials in order to immigrate to Canada.  The misrepresentation was intentional and continuous, the appellant has not expressed remorse, and he still does not understand the full gravity of his actions.

Really, what can I possibly add that hasn’t already been said in the above paragraphs quoted from the deportation ruling? 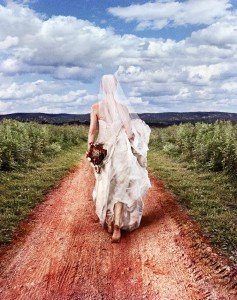 Lainie Towell has since written a book about the horrors of her fraud marriage and subsequent battle with Immigration Canada titled “How to Catch an African Chicken – A Canadian Woman’s Outrageous but True Story of Marriage Fraud”.

The book was available for purchase electronically until Lainie’s ex-husband and new Canadian wife (married just 1 week before he was deported from Canada!) filed a lawsuit against Lainie for, get this, defamation.

Until this absurd SLAPP lawsuit is resolved in her favour Laine Towell is prevented from selling her book by a temporary restraining order.

Lainie’s case is especially bizarre and horrific given her Right to Freedom of Speech is being trampled on by a man (dare I call him that?) who was deported from Canada and is currently living somewhere in Africa.

As you can well imagine, me being the Freedom of Speech advocate that I am, I am utterly dumbfounded that some sad and [allegedly] pathetic excuse for a man living somewhere in Africa can somehow strip a Canadian citizen of her Right to Freedom of Speech.

SAY NO TO CENSORSHIP
I am being sued by my ex-husband (who was deported from Canada in February 2012), and by his Canadian wife. They are trying to prohibit me from publishing my book, which is my personal memoir. I have never met his wife. This SLAPP suit is an issue of censorship and an attempt to stop freedom of expression and speech.

SAY YES TO FREEDOM OF EXPRESSION – HOW YOU CAN HELP
I am a Canadian citizen and an artist, who is being victimized for a second time now, by a man who was deported from Canada for the precise things he is suing me for expressing. These allegations continue to strike a blow to the integrity of our great country’s immigration system and suggest that Canada’s Federal judicial system is a sham. I am to appear in court on Sept. 17, 2012 to defend myself.

Lainie Towell needs our help to pay her defense fees.

While her ex-husband’s legal fees are paid for by our tax dollars (that thought alone disgusts me!) I am asking you to donate whatever you can (via PayPal to lainie@lainietowell.com) to help her fight this injustice.

Any contribution is greatly appreciated.