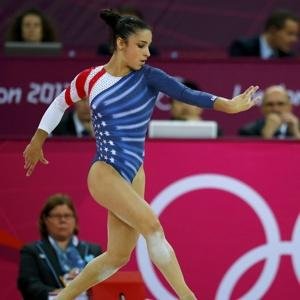 On August 8th I wrote about my disgust with Jacques Rogge, president of the IOC  and the entire International Olympic Committee for steadfastly refusing to honour the 40th anniversary of the murder of 11 Israeli athletes at the Munich Games in 1972.

That column, titled “And the Gold Medal for Cowardice goes to…. Jacques Rogge and the International Olympic Committee” made it clear I couldn’t comprehend why these gutless cowards can’t find it in themselves to honour athletes who were murdered on Olympic soil.  It’s a position that is truly beyond my ability to comprehend, and I’m not alone.

Turns out I’ve got some pretty good company, including the incredibly talented Aly Raisman, who dazzled audience and fans alike in her gold medal performance in the Floor Exercise.

While her athletic performance was truly breathtaking and I was among the millions dazzled by it, I quickly discovered this 18-year-old had more class than the entire International Olympic Committee combined.

In the aftermath of her victory, Aly Raisman said this to reporters:

“Having that floor music wasn’t intentional. But the fact it was on the 40th anniversary is special, and winning the gold today means a lot to me. If there had been a moment’s silence,” the 18-year-old woman told the world, “I would have supported it and respected it.”

Why is it, that in a world run by cowards willing to wet themselves at the slightest hint of anti-Islamic sentiment, it takes an 18-year-old girl to say what needs to be said to these pathetic excuses for grownups?

As Leonard Green wrote so perfectly in his column in the New York Post:

The International Olympic Committee and its president, Jacques Rogge, have refused to properly honor the dead, arguing that the opening ceremony wasn’t an appropriate forum for a moment of silence.

“Shame on you International Olympic Committee because you have forsaken the 11 members of your Olympic family,” said Ankie Spitzer, whose husband, Andre, an Israeli fencing coach, was gunned down in the massacre.

There’s really nothing quite like watching racism play out on an international stage.  I guess the only thing better is watching the racists being one-upped by an incredibly classy young woman of Jewish heritage on that very same stage.

“I am Jewish, that’s why I wanted that floor music,’’ Raisman said.

“I wanted something the crowd could clap to, especially being here in London.

“It makes it even much more if the audience is going through everything with you. That was really cool and fun to hear the audience clapping.’’

Well done, Aly Raisman!  While your Olympic performance was dazzling, it was your show of class after winning those medals that showed the world the true depth of your character.