Do you know the name Moshe Weinberg?

No?  How about Yossef Romano?

Still not ringing any bells?

I’m not surprised and you shouldn’t be either.

The International Olympic Committee is doing its best to ensure nobody knows the names of the 11 Israeli athletes murdered by terrorists at the 1972 Olympic Games in Munich, Germany on this, the 40th anniversary of that massacre. 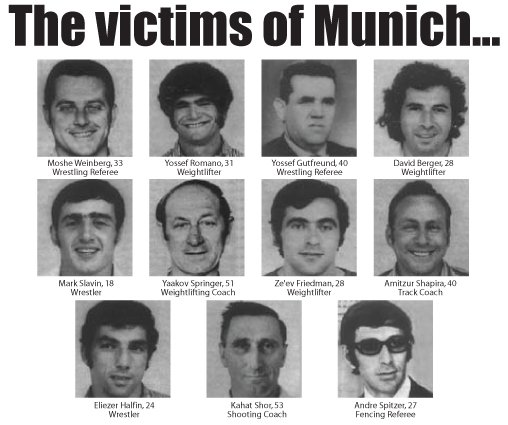 While every Olympics since 1972 has ignored the tragedy in Munich, never has the silence surrounding these 11 names ever been more deafening than it is right now during the London Games.

So eager to pander to muslim nations and the terror they inflict on millions of people around the globe every year, the International Olympic Committee has raised cowardice to a whole new level at London 2012 by ignoring these eleven men and worse, doing their utmost to pretend they never existed at all.

For the past few months there has been a concerted effort to get the International Olympic Committee to set aside one minute of silence at the opening ceremony at this year’s games to commemorate the Israeli athletes who were murdered—not killed, murdered—at the Munich games in 1972.

The games, held this year in London, are 17 days long. That’s 24,480 minutes. Despite the fact that petitioners were asking for only one of those minutes, it is now evident that their efforts have failed.

I would encourage you to read Deborah E. Lipstadt’s entire column.  She does an excellent job giving the history of the massacre and then International Olympic Committee President Avery Brundage’s disgraceful conduct during and after that terrible day.

Despite pleas from around the world to recognize these 11 athletes by devoting a whopping 1 minute of silence to them at the opening ceremonies, the International Olympic Committee preferred silence themselves, refusing to even acknowledge the requests.

How terribly… enlightened of them.

And by enlightened I mean cowardly, shameful, hypocritical and repulsive.

This was the greatest tragedy to ever occur during the Olympic Games. Yet the IOC has made it quite clear that these victims are not worth 60 seconds. Imagine for a moment that these athletes had been from the United States, Canada, Australia, or even Germany. No one would think twice about commemorating them. But these athletes came from a country and a people who somehow deserve to be victims. Their lost lives are apparently not worth a minute.

As Selwyn Duke wrote so eloquently in his column Olympic Hypocrisy: Jokes and Jews Need Not Apply,

It’s hard to beat the comic hypocrisy of the United Nations, which condemns Israel while having let nations such as Cuba and Libya sit on its human-rights council. But Western Olympic committees are giving it a run for its money.

Some have heard the story of Greek triple-jump champion Voula Papachristou, who was booted from the Olympics for tweeting a racial joke. This was followed by the expulsion of Swiss soccer player Michel Morganella, who, overcome with anger after a loss, tweeted some ugly sentiments about South Koreans.

The officials who axed them say that such behavior is contrary to Olympic values.

We have to ask, though, what these might be. Consider: While all this was going on, the Lebanese Judo team was refusing to practice next to the Israeli one and demanded a barrier be erected.

Reacting to this, an outraged Israeli official said, “What? They can’t see us, but they will smell us.”

As for the odor of hypocrisy, it grew even more intense.

Consistent with Western Liberal Stupidity, so long as the enemy is Israel any amount of hypocritical behavior is tolerated, allowed, even expected.   When it comes to Olympic values, the same hypocritical notion appears to rule the day.

Exactly what are Olympic values, asks Selwyn Duke, before explaining.

One thing they are is very, very Western. European nations have become notorious for enacting “hate-speech” laws and exercising a double standard in their application. If a Christian white person criticizes Islam, he’ll sometimes be hauled before a human-rights tribunal and punished. But no such fate awaits a Muslim criticizing Christianity; in fact, even expressing openly jihadist sentiments is often tolerated.

Israel is to the world what Christianity is to America: the only nation you can discriminate against without any worry about recourse.

For reasons I will personally never understand I have been pro-Israel since I was a child.  I wasn’t taught to be pro-Israeli.  My parents could not, as far as I remember, care one way or another about Israel.  I was more… born that way.

I willingly admit my pro-Israeli beliefs are quite irrational; I have no sound reason for my belief that Israel has a right to exist as a nation other than, I suppose,  that they are human beings like the rest of us.

I remember as a child hearing of the outbreak of the 1967 war and being so happy to hear within just days that Israel not only defended herself admirably, but also drove her attackers back with resounding ease.

I remember hearing, in the aftermath of the Munich Massacre,  stories of Israelis hunting down the perpetrators and killing them and thinking. “Good for them.  I hope they kill every last one of them.”

Does that make me anti-muslim? Hardly, but it certainly makes me anti-terrorist.  Terrorists understand one thing and one thing only: violence and death.  You cannot reason with a terrorist.  You can only kill him so that he cannot kill you instead.

The ironic thing about my belief that Israel has a right to exist is that it’s not baseed on anything tangible.  I simply believe it with every fibre of my being and always have.

Come to think of it, that’s pretty much exactly the same as the muslim belief that Israel should be wiped from the map.  Their belief is based, if in anything at all, in pure racism.  Muslims want Israel wiped from the map merely because it exists.  Jews live there and Jews must be exterminated.

Just like the International Olympic Committee is doing with the victims of the Munich Massacre; they’re doing their level best to exterminate any mention of those 11 Israeli athletes who were murdered for the sole “crime” of being Israeli.

To refuse to acknowledge those 11 men by a single minute of silence to honour their sacrifice the International Olympic Committee breaks for foundational principle the Olympics were founded on: being free of politics and war.

Well, to the International Olympic Committee’s great shame they are pandering to Muslim extremists around the globe, just as the United Nations does.

By giving in to the childish whims of Israel’s haters, be they athletes at the Olympic Games or nations at the United Nations, these organizations that are supposed to be above all this petty crap only ensure it will never end.

By erecting a barrier for the Lebanese Judo team the International Olympic Committee won the Gold Medal for Cowardice.

If they had the backbone God gave a gnat they would have told the Lebanese Judo team that if they didn’t want to practice next to the Israeli athletes they were welcome to go back to their hotel rooms, pout all they wanted and not practice at all.

Instead they caved like a house of cards and with about as much resistance.

While treating all athletes equally regardless of race or nation is obviously NOT an “Olympic Value”, World Class Cowardice most certainly is.