Anyone hanging out here for any length of time will already be familiar with Bureaucrat’s Rule #1, but for the benefit of any newcomers, here it is in all its repulsive glory:

Bureaucrat’s Rule #1:  The Rules are More Important than People

As you can see, it’s quite a simple rule and it is gleefully used the world over by tyrannical bureaucrats who love nothing more than crushing mere citizens under the weight of their ever-more-oppressive rules.

Steven Boyd and Karen Bursey bought some property in Conception Bay South, Newfoundland.  They proceeded to build their dream home and things were going fine until they discovered they had violated one of Conception Bay South’s many rules about how you can build on your own land. 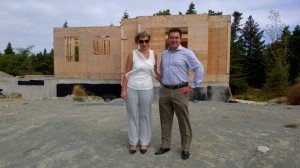 The problem was discovered after the foundation was poured, and was compounded by the shape of their property, located in a cul de sac.  The property lines are curved, not straight.

As other commentators have said, that’s about the length of a single poker card.

Hardly seems worth forcing someone to tear down their home, does it?

“It’s about the policies of the town and where buildings have to be located within the town.”

Ah yes… The Rules are More Important than People.

Conception Bay South Councillor Ken McDonald doesn’t agree with the mayor, however. He believes the council should give the couple an exception and let the matter drop.

“They want them to tear down a wall, tear down a concrete wall, and patch it back in to suit three and a half inches?” McDonald said. “To me it’s ludicrous, it’s ridiculous.“

Forcing a new couple to tear down their home is a heck of a way to welcome them to your town, isn’t it?  It hardly lives up to the words on the town logo: “Bright town. Bright future.”

Steven Boyd and Karen Bursey could buy the poker card strip of land from their neighbours, but instead of being neighbourly and helping out the people they will be living beside for many years, they want to profit by their neighbours’ nightmare to the tune of $25,000.

Ironically, that’s the same amount it will cost for the couple to tear down the wall, tear out the concrete foundation and move it back a few inches.

Now, to be clear this is NOT the neighbour’s fault.  Not one tiny bit.  They’re not the ones who poured a concrete foundation a few inches too close to the property line.  That’s entirely the fault of Steven Boyd and Karen Bursey and their home contractors and nobody else’s.

That being said, there is a thing called being neighbourly.  After all, they’ll be living beside Steven Boyd and Karen Bursey for a very long time.

To quote one of the folks who commented on the CBC news story,

“Remember the days when Newfoundland neighbours would help each other build houses, bring in hay, launch boats, deal with crises and so forth. Welcome to the new Newfoundland. It’s made in the image of Fort McMurray, Edmonton, Brampton, etc.”

There was a time when neighbours helped each other out without hesitation.

Now we want to profit from them over some stupid bureaucratic rule and a jerk mayor who can’t comprehend people are more important than rules and forcing this couple to tear down their home over the length of a playing card is just plain un-Canadian.