I was disgusted but not surprised that another piece of garbage in an RCMP uniform, Constable Geoff Mantler, walked free the other day, acquitted by Judge Takahashi.  I saw that one coming a mile off.

Reading the news, however, that arguably the most disgraceful person to ever wear an RCMP uniform, former RCMP Corporal Monty Robinson, will never set foot inside a prison cell for killing Orion Hutchinson and obstructing justice is, well, beyond disgusting.  It’s just a very bad joke on the Hutchinson family and our justice system as a whole.

The maximum sentence for obstruction of justice is 10 years in prison.  This is a very serious criminal offense.

One whole month of house arrest, followed by 11 months on probation.  Oh, and he has to write a letter of apology to the Hutchinson family and pay a fine of $1,000 to Victim Services.

That’s not a sentence, that’s an utter abuse of justice! 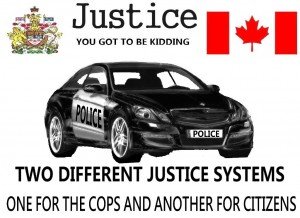 That is the judicial system showing total contempt for the victims of crime and coddling a criminal who should spend a very long time in prison.

I don’t care that Monty Robinson is “aboriginal”.  He was an RCMP corporal who knew right from wrong and specifically chose to do everything in his power in order to NOT be held accountable for his heinous actions.

That B.C. Supreme Court Judge Janice Dillon had the gall to go looking for “mitigating factors” when sentencing this piece of human trash tells the world that Canada does not take criminal misconduct by career police officers seriously.

It tells us and the world that, compared to the lives of police officers, we mere citizens should just count our blessings that they let us live at all.

Robinson’s every decision from the time he started drinking  that fateful October 2008 night until the time he returned to the scene of where he killed Orion Hutchinson were deliberate acts.  Deliberate, criminal acts.

Robinson chose to drink.  He then chose to drive while under the influence of alcohol.  After killing Orion Hutchinson, Monty Robinson then left the scene of his crime without so much as checking to see if the young man was even alive.  What was the hurry?  He needed to get home so he could down a couple of shots of vodka to “calm his nerves” aka ensure he could not be convicted of drinking and driving.

When he finally did return to the scene of his crime he then stonewalled investigators at every turn.  He specifically used his RCMP training to ensure investigators would not find out he had 5 drinks before getting into his vehicle and killing a man.

When it came time for court, Robinson lied repeatedly under oath until he was faced with testimony that proved he was lying.

He chose to obstruct justice and place himself above everyone else, including the young man whose life he had just snuffed out.

There is nothing to “mitigate” here.  This piece of garbage made specific choices every step of the way.  Mitigation is for cases where the person actually tries to do the right thing at some point along the way.  Robinson NEVER did that!  He did the exact opposite!

“What I find so outrageous is the whole rehab stuff just seems like a gambit,” Judith Hutchinson said to reporters.

“What’s he been doing for the last four years? He had all this time to seek reparations or give some kind of apology, and he didn’t do any of it. He got together with his crackshot lawyer, and the month before the trial starts, in January 2012, [the lawyer] has him diagnosed as an alcoholic. That is very convenient.”

By slapping Robinson on the wrist, saying “Bad aboriginal”and sending him home to 30 days of house arrest B.C. Supreme Court Judge Janice Dillon managed to disgrace herself, the entire Canadian justice system and every decent aboriginal man, woman and child in the land.  That’s not just me, the white guy talking, that’s the head of the BC Union of Indian Chiefs!

“This is a misapplication in his case because (these provisions) were never meant to be a loophole or a matter of convenience that high-priced lawyers can reach for in order to keep their clients out of jail,” B.C. Union of Indian Chiefs Grand Chief Stewart Phillip told The Province Friday. “So I think in that regard, this is a miscarriage of those provisions in the justice system.”

A $1,000 fine to Victims Services?  Is that all killing a man is worth these days?

Being ordered to write a letter of apology to the Hutchinson family?   I can’t imagine there is a single word they want to hear from Monty Robinson.

What they want… what they deserve… is to see Monty Robinson sit and rot in a jail cell for a very long time.

My heart and prayers go out to the family of Orion Hutchinson.

I’m merely disgusted because of the complete lack of justice in this case.  The Hutchinson family now has to live with the fact that the man who murdered their son (and then couldn’t even be bothered to check to see if he was alive before running home to down a few more shots of vodka) will not serve a day in prison for his crimes.

I guess I should not be shocked.  This entire case has been a disgrace from the start.  It is, I suppose, repulsively fitting that it end in a disgrace as well.

“We just wanted some kind of justice…This is very disappointing. It has been four years to come to this.”
— Judith Hutchinson

As I said, my heart and prayers go out to the Hutchinson family.   They deserved to see justice done for the killing of Orion Hutchinson.  Instead they got sucker-punched in the face and then kicked in the gut by B.C. Supreme Court Judge Janice Dillon and the entire Canadian justice system.

Yesterday I thought there was absolutely no chance that RCMP Constable Geoff Mantler could possibly walk free from his upcoming trial in November for brutally kicking Buddy Tavares in the face, even though the entire heinous act was caught on video.

Today I’m not so sure.